When you step out of the multi-storey car park and are greeted by the sight of Harley Quinn sat on a low wall pulling up her stockings as Batman casually strolls by without even a cursory glance in her direction (yes, that really DID happen), then you know that you must surely be approaching a Comic Con.

We covered last years event (see Kerry’s fantastic review here) and we were extremely pleased to return to see what 2017 had in store for the Comic Con that is held on the banks of the famous River Mersey.

First and foremost it has to be said that we found the organisation of the event to be superb. The Exhibition Centre is a very large venue, and with thousands of people attending over the 2 days, it could well have descended into a logistical mess complete with lots of frustrated attendees. However, the obvious hard work that had gone into all of the planning and the professional and friendly execution of it all by the staff and volunteers in attendance, made for an experience that was never frustrating and always enjoyable.

Being of ‘a certain age’ the first port of call HAD to be meeting Paul Michael Glaser, David Soul and Antonio Fargas. They are doing a series of shows worldwide to celebrate the 40th anniversary of Starsky and Hutch, and being a HUGE fan since originally watching them back then (and multiple times since) I was immediately giggling like I did as a child whenever I saw Ken Hutchinson leap on to the roof of the car and ‘hurt his bum’.

Meeting your ‘heroes’ is always a double edged sword; will they be the person you always imagined (hoped?) that they would be, or would they be arrogant arseholes who couldn’t give a stuff about their fans (I’ve unfortunately met a few of those in my time). I was extremely pleased to find that they were the former and greeted us with smiles, handshakes and were more than willing to swap stories while signing my Starsky and Hutch car, which is now pride of place in the living room. We had rewatched Magnum Force just the previous evening and it was bizarre to be, mere hours later, stood chatting to David Soul about it! He agreed with me that his demise at the end of the movie was quite unspectacular and that there should have indeed been a final fight between him and Clint Eastwood. For the record; his favourite screen performance of his own is in Salem’s Lot, which is a damned fine movie if you’ve never seen it.

We saw Paul Michael Glaser at the Lowry Theatre a few years ago in a production of Fiddler on the Roof (he was also in the 1971 movie) and we got chatting to him about that, which then led to Antonio Fargas joining in with us and a discussion about UK theatres began between us all. My 11 year old self back in 1976 would never have thought this possible!

We then walked across to the theatre where the 3 of them were having an hour long Q&A session. This was superb and the 60 minutes flew by. It was very clear that these guys still have a lot of love for each other and that they genuinely appreciate the fact that not only were they a part of an iconic television series, but are also still alive to enjoy the continued plaudits from all the fans. It wasn’t just a celebration of Starsky and Hutch, it was a celebration of life and living it to the full while you can. 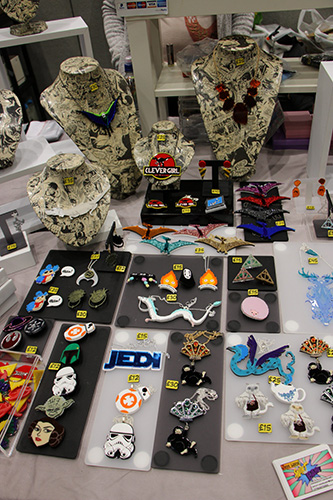 On walking into the theatre we caught the end of the Q&A by Louise Brealey, and while never having watched Sherlock I found her stories and her sense of humour to be quite a joy to listen to. The day that we were there (Sunday March 12th) the theatre hosted 9 events, ranging from Q&A sessions with the celebrity guests in attendance, to a cosplay masquerade, with each and every one of them well worth attending.

The main hall was logically split into different sections: comic village, signings and photos, cosplay, movies and games, kid zone, steampunk and main trader section. This made it very easy to find exactly what you wanted without having to wander aimlessly around a huge hall. Though if you DID happen to just wander aimlessly, you were always guaranteed to come across some very interesting stalls and people.

Tina was drawn like a moth to a flame to the Snikt and Bamf! jewellery stall where she met the very lovely Jessica Leese. Upon trying on an amazing planetary necklace, there was no going back and credit card was whipped out. Jessica makes some amazing original pieces and is certainly worth following on all of her social media outlets (see links below). Just be prepared to spend some money when you visit her website as there is a lot of great stuff on there to choose from. 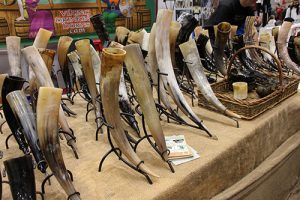 While Tina was hypnotised by all the jewellery, I was drawn to a nearby stall that was selling Viking drinking horns. Covering all sizes and complete with their own stands, these would immediately add an extra 50% testosterone to any man that drank from them. Some were elaborately carved and all had their own original shape and colouration. They make drinking from a pint pot look like your sipping from a dainty cocktail glass.

The above are just 2 examples of how this comic con isn’t just comics, guests and movie memorabilia. There really is something for everyone and it rewards spending at least one full day to wander around and discover all that it has. We certainly look forward to returning in 2018 and seeing what we can find again and meet loads more lovely people.

Please bookmark the MCM Comic Con webpage to keep updated with all their events, while liking their Facebook page and following them on Twitter: @MCMComicCon

You can keep updated on Jessica Leese and her wonderful jewellery by bookmarking the Snikt and Bamf! website, liking the Facebook page and following on Twitter: @SniktandBamf

Review by Dave (host of 60 Minutes With) with thanks to MCM Expo Group for the press passes.