It was the year I discovered rock music, and I spent my pocket money on albums from KISS and Scorpions. But it was Judas Priest who took my rock virginity when they appeared on Top of the Pops and sang ‘Take on the World’ (video below). From that moment on, my parents would forever hear the sounds of distorted guitars, loud drums and screaming vocals coming from my bedroom.

It also changed the way I dressed too, with jeans and a band/tour t-shirt becoming my regular attire…which it still is 40 years later.

So my excitement levels were high when we were offered the opportunity to go to KK’s Steel Mill in Wolverhampton for a very special gig, where there would be 3 live bands playing, and which culminated in an epic Judas Priest musical amalgam with KK Downing on guitar, Tim ‘Ripper’ Owens on vocal and Les Binks on drums…be still my beating heart!

The aforementioned trio of Judas Priest alumni were joined by Dave Ellefson on bass and AJ Mills on guitar.

At an event that not only hosted an epic ‘Mega Priest’ gig, there were live shows by Blaze Bayley, and also a set by Dave Ellefson. Surely the ticket prices would be a bit wallet bruising?

Knowing the economic market at the moment and that people don’t have much cash to spare, KK’s Steel Mill had the ticket price for the event at an incredible £10! Plus, if you wanted the VIP experience of a meet and greet with everyone and the chance to get memorabilia signed, then this was only £20…and that included entry to the gig too!

The general welfare of the attendees didn’t end there either, as the whole event was scheduled to finish at 10:30pm, ensuring that anybody relying on public transport didn’t miss their last bus/train.

Onto the evenings events…

I was privileged to attend the pre-gig Q&A session (video below) and it was an absolute please to see all the guys obviously having a great time together. Please pour yourself a drink and sit back and enjoy the video.

Due to the VIP event over running slightly, Blaze Bayley’s set started while the Q&A was still happening. This, combined with the fact that I went straight to the merchandise stall when the Q&A finished, meant that I only caught the final 3 songs of Bayley’s set.

Blaze was his usual high energy self, and was genuinely excited and humble to be playing there on such a momentous evening. He also made himself readily available to anyone after the set who wanted a chat with him or free photos. A man who certainly appreciates his fans.

Next up was Dave Ellefson, who was scheduled for 2 shows in the UK…this one and one the following evening in Camden, London.

Apparently, Camden was going to be the only gig until Dave asked KK to join him for an onstage jam. This then escalated to this amazing event at the Steel Mill!

It’s no secret that I’ve never been a fan of the likes of Megadeth, Metallica, Slayer, etc (I await to be lynched once again online for that!)…but fair play to Dave for putting on a great show that had the crowd pumping their fists and screaming out loud.

Finally it was time to once again see KK on stage blasting out some Judas Priest guitar solos…with the added bonus of Les Binks back on drums and the awesome vocals of Ripper Owens. 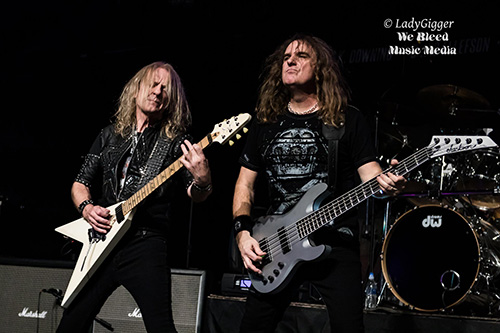 The crowd went wild as ‘Riding on the Wind’ got the set off to a storming start. Flames licked the lighting rig, KK looked no different than ever as he wielded his trademark ‘Flying V’, lifting it high above his head as the notes screamed out of the speakers, while Ripper’s powerful vocals made you appreciate even more the albums he made with Judas Priest.

A great mixture of songs from Priest’s past were played, all with such force and passion that all who were in attendance will never forget the evening.

I can’t stress enough how much I absolutely LOVED this gig. The setlist was superb and covered the eras for KK, Les and Ripper. Each and every song played with the energy and passion that a band half the combined age that was on stage would find it hard to beat.

It was seeing KK back onstage playing Priest songs that really knocked me out though. I’m sure the ceiling at the Steel Mill needs cleaning, as more than once some dust must have gotten into my eyes and made them run as I watched KK on stage, Flying V majestically raised high.

The final 3 songs of the set drove the crowd insane, and when Les started pounding the iconic drum beat of ‘Take on the World’, that damn ceiling dropped so much dust into my eyes that they watered even more…my inner 14 year old self from 1979 went insane…and was very pleased too that his older self was still wearing jeans and a tour t-shirt. 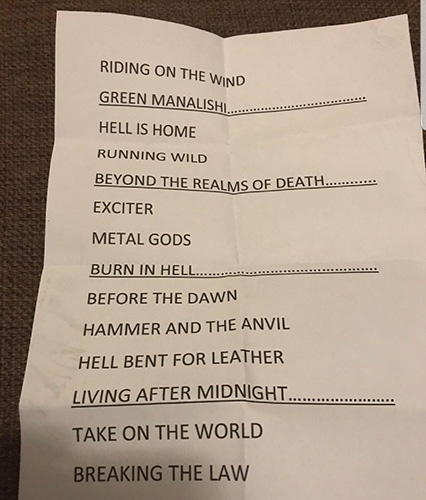 This was not only my ‘gig of the year’, it now also sits in my top 5 gigs EVER.

The energy, the stage show, the musicianship, the songs, the crowd, the venue, and yes, the sheer love of seeing these guys onstage, all made for a very special evening indeed for me.

Fingers crossed the popularity of this amazing night gets them all back together again soon…and if it happens…I’ll see you there.

Review by Dave from press access kindly supplied by DropDeafPR