I think a lot of people would pick out Kate Bush as an easy artist to imitate. Yes, we all remember (well those of us who are old enough) Faith Brown flailing her arms about on BBC 1 on a Saturday night, eyes agog, wailing out Wuthering Heights.
And perhaps regular readers may think I am not the best person to review a Kate Bush tribute act. But I am the perfect person; my love for her music makes any chance to sing along live a pleasure…if it’s done well. 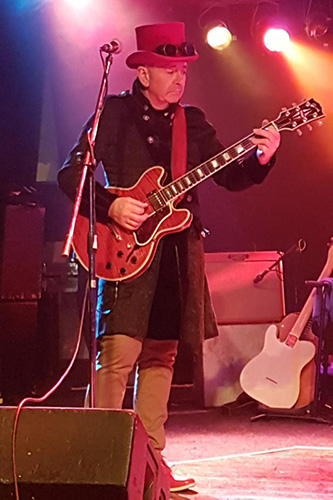 To me a tribute act has three absolute requirements to work; a good solid backup band, that the tribute looks a little bit or even a LOT, like the person, and most importantly, they try REALLY hard to sound like that person.
I feel that if you don’t sound somewhat like the artist you are imitating, then you are, in fact, a singer performing that person’s songs. Which is fair enough, but don’t claim that you are a ‘copy’ or a tribute band.

So let us put the terrible impersonations, arm waving and high vocals aside and think about Kate Bush, most beloved performer, who has been around for 38ish years, 12 albums (one live) ,1 box set, 2 tours, completely original, no one else like her, Kate Bush. The one and only.
You’d have to have some massive kahunas to take Kate off.
First off there’s her voice. Who else sings like her? She has one of the most distinctive singing voices, she also has a huge voice and she can really belt it out live. Then there’s her actual performance. In her early years, as a student of mime, she incorporated some of this, but mainly dance. Look at any of her videos up until The Sensual World and you’ll see Kate dance. So basing a whole act on Kate is hard. Great songs that are difficult to sing, and perhaps more relevant, finding that fine line where you can impersonate her without becoming a pastiche, or even taking the piss in arm flailing heaven.

The Red Shoes fronted by Lorrie Brown are a Kate Bush tribute band. Lorrie wears a circa 1979 Kate wig (Wuthering Heights) which does look rather ‘ratty’, and changes outfit for practically every song she sings. These outfits are basically what Kate wears in the video or during her 1979 live show for each song (for example; Them Heavy People, she wears a raincoat and hat). I didn’t get a close up look of Lorrie, but from a distance she appeared to be an ok lookalike, albeit a little bit older, for 1970’s Kate.
Unfortunately Lorrie sounds nothing like Kate. I don’t know if she was trying to impersonate her voice, but she is absolutely nothing like her. Which in my book makes her someone who is singing the songs of Kate Bush, in her own voice, and that’s fine I suppose. But maybe not so great for a Kate Bush Tribute.
Everyone has off nights when they perform, and the look of disappointment on the bass players face when he saw a handful of people in the audience was palpable. There were about 20 people at the performance. But my son is the singer in a band, and I know some nights he’s performed to 5 people, but every one of those people left home (in the rain), got to the venue and paid the ticket price. So you owe it to that audience, even if there’s 3 of them and a dog, to slap a smile on and give it your all. 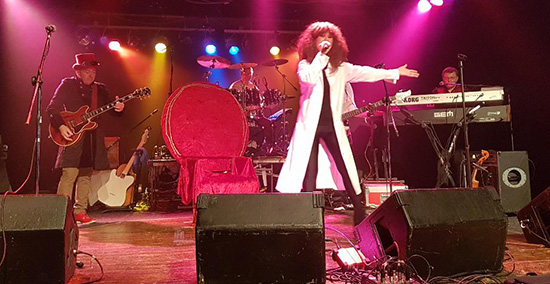 The Red Shoes had two huge problems that night. Lorrie would sing, and then go offstage, leaving the band (esp. the bass payer) look quite bewildered, confused even, the song would end… then another 20 seconds would pass before she returned. Leaving the audience looking around and wondering what exactly was happening. At one point I honestly thought she wasn’t coming back on and it was the interval.
I think the only answer to this is to stop all the outfit changes. Wear one outfit, stay onstage, and sing. Don’t leave such massive empty spaces where the band are twiddling their thumbs. Then there’s their soundman who obviously had no idea what he was doing as the bass sound was deafening, as was the guitarists accompanying vocals, he literally drowned Kate out several times, while their sound engineer fiddled with his phone! Thankfully the Tivoli sound guy was on hand to keep tapping him on the shoulder and point out what adjustments to make.

The worst thing for me was … yes…. she did all that awful arm waving stuff that Kate simply doesn’t do. Okay you can get away with it on Wuthering Heights, and Hammer Horror, but NOT when you sing Cloudbusting or any of the later ones. She did attempt to copy the video of Babooshka with the cello, but… hmmm. 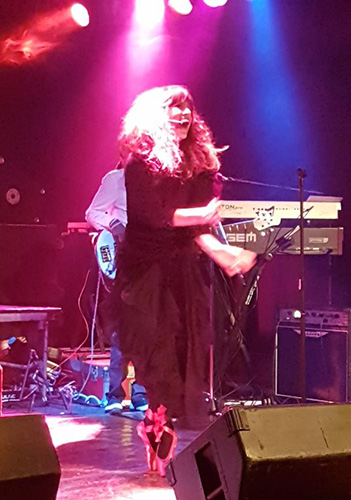 I don’t want this review to be a shit sandwich. I went to the gig with an open mind and an open heart, hoping to sing my socks off, because bottom line is – There is only one Kate, and I was happy to just listen to a live band do her stuff. I think this band would improve greatly if that’s what they did. Stop the costume changes and maybe say Lorrie Brown sings the songs of Kate Bush. Not even the sight of Lorrie in red satin Pointes pirouetting across the stage could pull me in. When she sang Moments of Pleasure I felt like crying. And they weren’t tears of joy.

This is a terrible review, and I do feel bad about slating this band. But the thing is, there are some amazing tribute bands out there; Dressed to Kill, Dirty DC and Belinda Davids who sounds more like Whitney Houston that Whitney did.

I don’t think The Red Shoes are part of this list, despite them winning a ‘best tribute band’ award in the summer.
Now having said that, the few people who were in the Tivoli LOVED her. There were 4 girls dancing away at the front and one man came up to me and said she was ‘fucking loads better than Bush’. So there you go. For the people who were at that gig, she was Kate for the night and she made them happy and that’s all that matters.

Thanks as always to Mr & Mrs Miah at the Tivoli, who work tirelessly in keeping our favourite venue active with great bands and events.

Review by Tina (co-host of 60 Minutes With).

I used to live in Los Angeles and write about Rock bands. Now I live in wonderful Wales and write about films. I like video games (especially RDR2) and am also a painter...gratuitous plug: follow my art account on Instagram @artbytinar
Review: My Life As A Dog Review: Mo’ Better Blues