We also love discovering all of the above from creative artists that may hitherto have not been promoted by the mainstream press, and we find great pleasure from new/unsigned bands, indie video game makers and indie filmmakers. Luckily for us Starburst Magazine thinks the same and this wonderful 2 day showcase of independent cinema (with a few more mainstream titles thrown in for good measure) is an absolute treasure trove to not only watch fantastic movies that your local multiplex is not showing, but also have a chat with the filmmakers too.

With a variety of screening rooms to drop into as and when you like, there is always something playing that you’ve ticked as a ‘must watch’ in your programme guide…and don’t forget the Q&A sessions too. 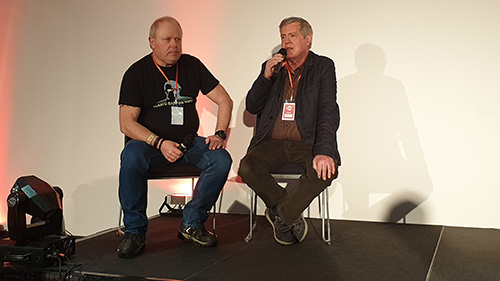 Fantasy, sci-fi, and horror tales are on constant rotation, and a well stocked bar area is right in the middle of it all for when you need a little refreshment.

The bar area is an ideal meeting point too, and as you wander around deciding which screen you’re going to go into next, you suddenly find yourself face to face with the director of the previous movie that you watched. Then…wait a minute…isn’t that Lloyd Kaufman sitting over there!? Hold on…did Luigi Cozzi just walk past me!?

The special guests at the Starburst International Film Festival were not only very generous with their time chatting to everyone, they were also incredibly friendly and went out of their way to make sure that nobody left disappointed.

The unexpected is to be expected here, and it was great to chat with Séamus Hanly at the Troma stall (where I happily handed over cash for some Troma movies that were missing from my collection), he’s the writer and director of ‘The Middle Finger’ and I look forward to recording a show with him soon about indie filmmaking and how he got his movie released by Troma. 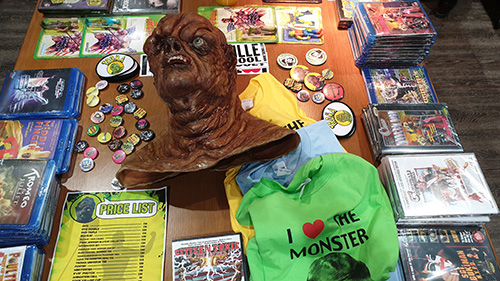 The Starburst International Film Festival is a relaxed event where old friends meet and new friends are made…all while discovering a multitude of talented filmmakers whose work deserves to be seen by as many people as possible.

The Starburst Fantasy Awards rightfully give credit to the people involved in all of the great work on show, including a Hall of Fame award for Lloyd Kaufman…make sure to hear our ‘remastered’ interview show with him. 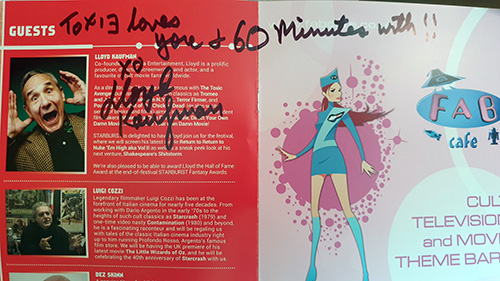 For all fans of cinema, the Starburst International Film Festival is an event that should immediately be put into your diary. We’ll see you there next year.

Review by Dave (host of 60 Minutes With) with thanks to Starburst for press access.