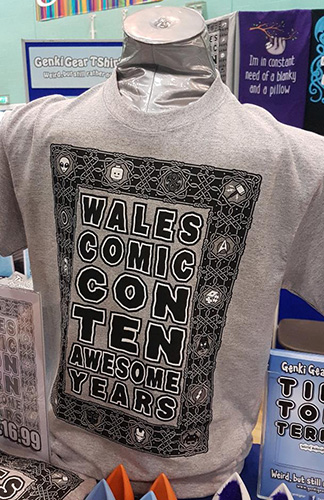 Started in 2008 by Jaime Milner and Ash Blackwell, Wales Comic Con is a definite one off. Over the years I’ve been to a lot of Comic Cons in the UK and USA (yes even The San Diego CC at Golden Hall in 1990, and then in the San Diego convention centre in 1991), so I have history with this type of event, and no other CC can compare to WCC.

For the last eight years we at 60MW have attended Wales Comic Con and watched it grow from its humble, somewhat disorganised beginnings, to a behemoth of Geekdom, an almost finely tuned machine, and a temple to worship at.

People from the world of film, TV, wrestling, sport and ‘personalities’ are within your grasp, and despite its size, WCC is without a doubt, the most personal, and accessible CC there is. All celebs have photos available for signing, and queues are unsurprisingly long for the bigger celebs (Andrew Scott’s line was enormous), but that opportunity to approach someone, have a chat, shake their hand, is something other CCs don’t offer in such a personal way that WCC does.

Over the last ten years WCC have attracted bigger personalities. Unfortunately, due to ill health, Val Kilmer and Sean Astin cancelled. A huge blow for fans, however it really didn’t impact on the ‘starburst’ of other people there: Sean Pertwee, Tyler Mane, Paul Shipper, Andrew Divoff, Andrew Scott, Frankie Muniz, Amy Jo Johnson, Billy Zane, Paul McGann, JohnRhys Davies, Greg  Grunberg, and Juliet landau to name a few.
Past CCs have had Jason Momoa, Jonathan Ross, practically a full cast from The Walking Dead, most of the Lord of the Rings, almost everyone from Game of Thrones, Lou Ferrigno, Graham MacTavish and DOUG COCKLE. I like Doug a lot.

Throughout the day guests gather in the main hall of Glyndwr University and take part in Q & A sessions (all included in the price of your ticket), including Buffy, Heroes, Wrestling legends, LOTR, Overwatch, Pokemon, and Paul McGann and Andrew Scott both had wonderful sessions, where I thought several female members of the audience would faint when Andrew took to the stage.

The actual set up of the event has greatly improved year on year. There is now a huge tented area containing all sorts of memorabilia from photos, to figures, T-shirts and posters. Separate areas for gaming, and also for games of the board variety (which is a fantastic inclusion in the true spirit of a CC).  All the people who work at the event are volunteers, and they do an admirable job. Often getting a lot of flack from punters seeing several of them sitting (as handlers) with guests can sometimes be quite funny, as they are starstruck as visitors are!

Perhaps the main selling point is not the amount and quality of the guests, but rather the amazing atmosphere of the event. The sense of excitement is palpable, the amount of people who dress up and really make an incredible effort on their costumes, is wonderful, and there are a lot of professional Cos players who are fantastic. Doug who cosplays Negan (Jeffrey Dean Morgan) off The Walking Dead is without a doubt the BEST lookalike I have ever seen. In fact a photo I put on my private FB has caused a stir with my friends who think I am really with JDM!  (https://www.facebook.com/MacDoogCosplay/). 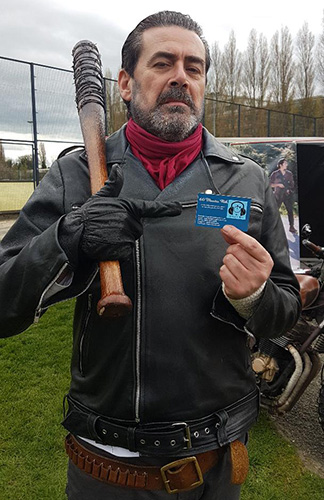 I can encapsulate the whole experience with one image that still sticks in my mind: sitting outside the signing hall in the sunshine, surrounded by excited children, VERY excited adults and various Batman, Rick Grimes, Harley Quinn’s (yes she’s still there), and a rather wonderful Mary Poppins, I spied in the distance a lone kid. He was about 11 or 12, and on his back was some cardboard, coloured in black and red in felt tip. It was falling off him because he hadn’t used enough sellotape. In one hand was a bag, chock-full of goodies that he had bought, and in the other, a light sabre. As I looked at him, and he was obviously by himself, in a raggedy homemade costume, I felt a genuine pang of sadness, until he turned around and I saw his face. The genuine smile of happiness on that lads face was a joy to behold, because despite his falling apart, crap costume, and being by himself, he was having a great time. The best time, and he was Darth Vader for the day. I could have cried looking at him because he is the very essence of Wales Comic Con, the soul and spirit  of it; not as slick at SDCC, no film previews, no Henry Cavill or Chris Pratt, but something MUCH better; a big heart, and a personal touch.

Huge congratulations are due, as in the last 10 years, the creators of  WCC have achieved the impossible: they have created a massively successful and ultimately enjoyable event in a small town in Wales, and it can only grow!

We at 60MW are already excited for the next instalment in December 2018. 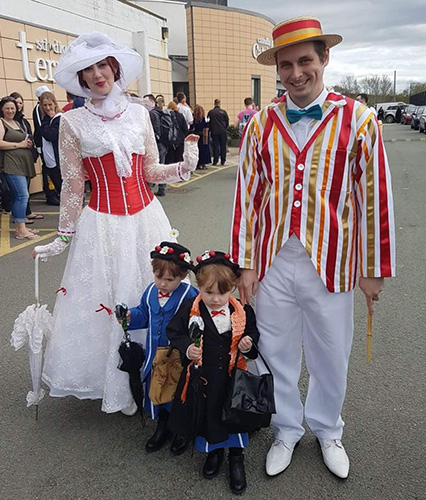 Review by Tina (co-host of 60 Minutes With) from press passes kindly supplied by Wales Comic Con.

I used to live in Los Angeles and write about Rock bands. Now I live in wonderful Wales and write about films. I like video games (especially RDR2) and am also a painter...gratuitous plug: follow my art account on Instagram @artbytinar
Review: The Hellbound Heart audio play Soundcheck interview: Janet Gardner