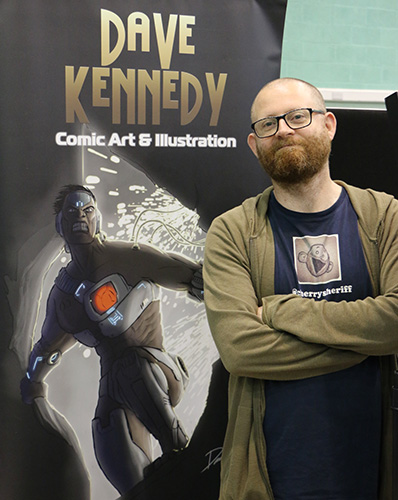 A few years back I caused a bit of a Twitter storm with a review of Wales Comic Con. I try to be ‘nice’ in reviews but am always aware that when I read a review I want the truth, good and bad.
I am also a geek (yes it IS possible to be ‘old’ and still be a geek), so having a Comic Con right on my doorstep is a HUGE positive.
So reflecting on previous WCC’s I can safely say that this event improves greatly each time.
The event staff are mainly made up from volunteers and they do, what can be a bit of thankless job (although I’m sure the girl looking after Manu Bennet would disagree) dealing with the frontline audience. But all of them do a fantastic job, with huge smiles and are extremely helpful.

This time the event was spread over a whole weekend, and I foresee a time in the near future where the event will become so large it will need a new venue to take the numbers present. Perhaps the most ground breaking event at this CC was the inclusion of a LIVE Ash Vs Evil Dead episode accompanied by commentary from the director (which I missed due to the enormous Michael Biehn photo op queue). This is the direction Mercury Productions need to go in – to take inspiration from The famous San Diego CC. I think this could be possible; WCC is now attracting ‘A list’ celebrities (earlier this year the new Aquaman Jason Momoa was a guest) so the next step is film panels. I mean, wouldn’t that be something?

One massive plus to WCC are their ‘talks’ which are free (a lot of other CC’s charge extra) this year they had Smallville, Arrow (which was hugely popular), Game of Thrones, Torchwood, Harry Potter, Buffy, Star Wars, Lord of the Rings, Dragon Ball Z, Wrestling and Lost Girl.
Now I know a lot of people complain of the same old guests, including me (Mark Addy yet again) but the HUGE difference with WCC now is that there are MORE guests, so despite the old stalwarts still doing the rounds, you can now skip past them to gaze upon Michael Biehn and Manu Bennet and Allison Mack (who had the biggest queue). Talking of queuing; they now place the most popular guests in appropriate places. This used to be a major problem, but no more! The Buffy gang had their own room, which they needed as I think most females were trying to get a look at Spike.

A huge thrill for me was meeting the wonderful Paul Shipper. Regulars know I’m obsessed with art and getting to meet and talk to Paul was amazing (I could have spent all day talking to him).
Next to him was David Kennedy, another incredible artist, so I was more than happy! Check out their sites you’ll be knocked out. To me a Comic Con IS about comics too, but I think that is being sadly lost amongst the celebs and autograph hunters. 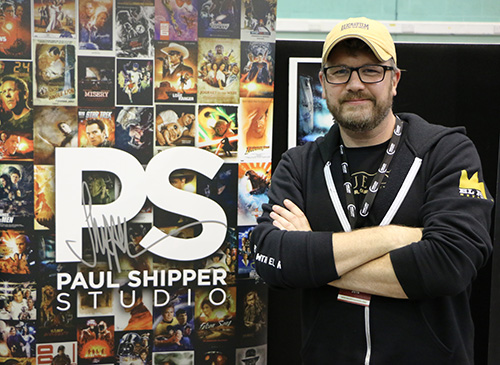 So, the downside. Ah it can’t all be roses can it? The main one was the photo ops. The queues to get into the building were HUGE, and I think the wait was at least an hour. Now this was not the fault of the promoters, but the actual company who was taking and printing out the photos. They had ONE printer. At other Comic Cons you get your photo taken and by the time you leave the room, there it is… not here. They had problems with the previous company also, and this was a new one! This is one area that needs attention as I’m sure it’s a massive money-maker. The queues are too long and having to go back THE NEXT DAY is… ridiculous. Some people had come for the day from Glasgow and had 4 celeb photos each… they went home with nothing. However, I was impressed to see that WCC tweeted and Facebooked about the problem, they didn’t ignore it, they answered all queries and gave the address of the company to get photos sent to them. So basically it wasn’t WCC’s fault, and they did try to help. They DO need a reliable company for the next WCC.
The other moan is a personal one to me, and that’s charging £10 plus for a selfie with a celeb. Now I understand the constant ‘can I have a selfie’ holds queues up, but charging for them… well that smacks of pure greed to me. I would never pay for a selfie. But that’s me.

All in all I had a great time at Wales Comic Con 2016. It was stress free, everyone was lovely and even the fact that virtually every female decided to dress as Harley Quinn couldn’t take away my enjoyment. Some of them really shouldn’t wear hot pants.

I used to live in Los Angeles and write about Rock bands. Now I live in wonderful Wales and write about films. I like video games (especially RDR2) and am also a painter...gratuitous plug: follow my art account on Instagram @artbytinar
S.O.S – Land of the Free Review: Gomorrah Seasons 1 & 2