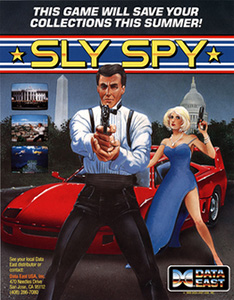 The first time I remember playing Sly Spy was during a trip to Alton Towers sometime in the early nineties. I was a huge James Bond fan, so I was instantly drawn to the arcade cabinet which was clearly influenced by the suave secret agent with a licence to kill. With this being an arcade game, I didn’t get very far as I had limited 10p’s to feed into the ravenous mechanical beast. Fast forward 25+ years later, it’s time to see if Sly Spy leaves me shaken and stirred!

You play as the titular Sly Spy who is out to stop a terrorist organisation from setting off a nuclear bomb! To be honest, the plot isn’t particularly important and all you need to do is shoot the crap out of hundreds of bad guys.

Initially Sly Spy is excellent fun which matched my memories from the day trip to Alton Towers. The game starts with you skydiving from a plane whilst being assaulted by dozens of enemies. As you land, you are running and gunning to your next destination, fighting your way to a nearby motorcycle. The next level sees you underwater as you are not only attacked by lethal frogmen, but also great white sharks. The pace is relentless!

As was the case with a lot of arcade games, the first 10 minutes are excellent fun which gives you the impression that there is a lot of variety in the levels. This was mainly done to attract as many players as possible and get people to part with as much cash as possible. The problem with Sly Spy is that the second half of the game becomes repetitive and insanely difficult, which unfortunately takes some of the shine from the first part of the game.

One of the enjoyable things about Sly Spy is spotting the nods and winks to classic Bond villains. I’m sure I spotted characters that resembled Jaws and Oddjob, as well as many others. Sly Spy is a bit like all the best action scenes thrown together from James Bond movies. It is fun for a short time, but don’t expect it to keep you entertained for very long.

Graphics – The graphics are nice and colourful with some excellent representations of characters from Bond movies. 7

Sound – There is some decent music which fits the spy theme, but nothing is particularly memorable. 6

Playability – Initially Sly Spy is very playable, with some nice variation of the levels. After about 10 minutes it becomes very tough indeed! 5

Re-Playability – Despite being a very short game, it is unlikely that you will want to replay Sly Spy. 4

Overall – Sly Spy is a fun little game while it lasts. It suffers from the same problem that arcade games often had, which is that they become very repetitive and your interest wains quite quickly. Despite this I enjoyed spotting the nods and winks to James Bond characters and movies. 5

(Make sure to watch the video below on our lovely new YouTube channel (subscribe and never miss anything we put on there), where Chris plays through Sly Spy while giving a running commentary – Dave)

I love video games and movies as much as I love my children. However, I'd rather face off against the worst end of level boss, and watch the scariest horror movie than visit another soft play! Thanks for taking the time to visit the website and read this review. Please send any complaints to Dave and any money to me!
Steve’s Top 10 Albums of 2017 November/December 2017 Entertainment Show