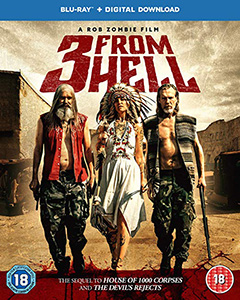 Writer/director Rob Zombie gives more of the same ‘grindhouse’ style storytelling as the titular ‘3 from hell’ once again cause pain and mayhem to everyone they meet, all with stylised grainy shots and slow motion sequences.

The title derives from an original idea by Rob Zombie that Otis, Baby and Cpt. Spaulding were sent to hell after dying at the end of the previous movie, and then returned to earth after being ‘too evil’ for hell…which also ties in with the previous movies title of The Devil’s Rejects.

This idea was rejected though as he didn’t want the characters to be supernatural beings, so instead they are multiple gunshot survivors after the police that we thought killed them, were in fact all really crap shots.

Cpt. Spaulding disappears from the narrative rather quickly (due in no small part to Sid Haigs failing health, and who in fact sadly passed away not too long ago), but in comes Winslow Foxworth Coltrane (Richard Brake) to replace him.

From here on in it is a rehash of virtually everything that we’ve seen before from Devil’s Rejects, which if you enjoyed that movie could well be a good thing, but certainly not if you were looking for something different.

I would love to see Rob Zombie direct a movie where (A) He has no part in the writing process (B) He doesn’t put his wife in it.

It seems at this point that while both the above A&B are active, then you know exactly what you are going to get with a Rob Zombie movie.

3 From Hell has misplaced silly humour, awkward camera angles where you often miss the action, and characters (that while admittedly were never really originally portrayed as anything other than over exaggerated caricatures) that are just downright over the top and silly for a good majority of the narrative.

If you like Rob Zombie movies then this will probably satiate your appetite much like your favourite fast food…filling, but could be far better.

If you haven’t enjoyed his previous movies, then there’s nothing here that will change your mind.

I for one would still rather listen to Rob Zombie’s music than watch his films.

I hope that one day soon he will change my opinion.

Review by Dave from a disc kindly supplied by Witchfinder PR.