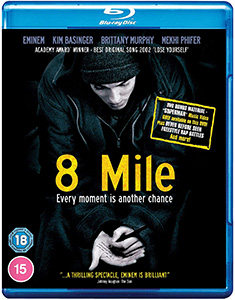 8 Mile passed me by back in the day, and not being a rap fan I didn’t seek it out despite its director, Curtis Hanson being on my radar from The Wonder Boys and the amazing LA Confidential.

Starring Eminem in his film debut, alongside Mekhi Phifer, Brittany Murphy, Michael Shannon, Anthony Mackie, and Kim Basinger, the film is supposed to have some  autobiographical elements from Eminem’s real life.

It tells the story of working class ‘trash’ white rapper Jimmy (Bunny) Rabbit (Eminem) and his attempt to launch a career in hip hop, a genre that was and is still, dominated by African-Americans in America.

What could have been a VERY ‘b’ movie made for TV film, is elevated mainly by Eminem’s amazing  central performance as the wannabe rapper.

The story itself is simple enough, poor boy from the wrong side of the tracks hopes to someday …have a record contract. On the way he meets Brittany Murphy and shags her, moves in with his bingo obsessed alcoholic mum in a trailer park and fights with rival rappers. A few times I had Prince and Purple Rain flashbacks but Eminem doesn’t wear high heels.

So as films go, it is a bit dated, has a very ‘meh’ plot, but does have a truly mesmerising central performance off Eminem. I don’t know anything about rap but did enjoy the film and extras.