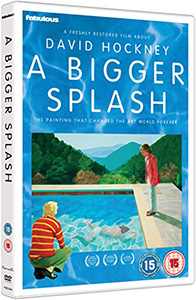 A Bigger Splash was filmed in 1973  and is a British biographical documentary film about David Hockney‘s breakup with his then partner Peter Schlesinger from 1970 to 1973. Directed by Jack Hazan, and featuring many of Hockney’s circle including designers Celia Birtwell and Ossie Clark, artist Patrick Procktor, gallery owner John Kasmin and museum curator Henry Geldzahler. It’s a ‘fly on the wall documentary’, intercut with fictionalised elements, and is, a film of it’s time. That time being flares ahoy 1973.

I couldn’t even say it was arty, it’s just plain boring, meandering, navel gazing, and wholly pointless.  I’m not a huge fan of Hockney’s art, however I’m always interested to see any documentaries or films (Love is the Devil, Pollock) about artists. But this is like a slow lingering death all accompanied by extremely loud, sad, annoying music by Patrick Gowers.

I hate to give any film a negative review, but this is a prime example of watching something to the bitter end knowing you’d never get that time back and wishing you’d watched kittens on YouTube instead.

I used to live in Los Angeles and write about Rock bands. Now I live in wonderful Wales and write about films. I like video games (especially RDR2) and am also a painter...gratuitous plug: follow my art account on Instagram @artbytinar
Open Beta of Kaze and the Wild Masks starts on Steam today Otherwise release official video for “Crossfire”