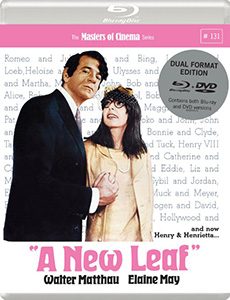 Henry Graham (Walter Matthau) a spoiled, brattish, self absorbed American ‘aristocrat’ decides on finding out that he has lost all his money, that he must marry a rich woman and kill her to inherit her assets.

I must admit to having never heard of Elaine May, despite her directing Ishtar, and famously (??) being the ‘comedy partner’ of Director and writer Mike Nichols. I’ve since watched her (and them) on YouTube and can say this woman is amazingly funny and I’m glad this film prompted me to seek her work out.

In a nutshell A New Leaf is an odd little film, almost European in its humour, where it’s not laugh out loud funny, but rather a subtle and gentle sort of love story about two misfits who end up together because they genuinely need each other. Matthau is as usual, wonderful, his hangdog face can say a thousand words without uttering a syllable. May is his equal, her massive Deirdre Barlow glasses and blinky eyes, oblivious to his murderous intent and selfishness, searching out Matthau’s humanity and finding it just as he’s about to kill her.

Part of the Masters of Cinema (Eureka Entertainment), this is another stand out release.

Review by Tina (co-host of 60 Minutes With) from a disc kindly supplied by Eureka Entertainment.

I used to live in Los Angeles and write about Rock bands. Now I live in wonderful Wales and write about films. I like video games (especially RDR2) and am also a painter...gratuitous plug: follow my art account on Instagram @artbytinar
Live Event: One Man Breaking Bad Chris’s Top Ten Videogames of 2015: #10