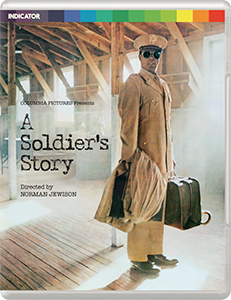 A Soldier’s Story is an odd film. Based on the Pulitzer Prize-winning Broadway production of the same name, it features a largely black cast and tells the story of the murder of Vernon Waters, a master sergeant in charge of a company of black soldiers in southern America in 1944.

A black military officer who is also a lawyer is sent to investigate the murder of this sergeant in an army commanded by wholly white officers before segregation had ended, in a time and place where a black officer is unusual to say the least, and hated by nearly everyone he encounters, both black and white.

The actual ‘theme’ of the film is very powerful, and somewhat shocking (I won’t ruin it for you!), and this would have been a real classic if the central protagonist wasn’t so miscast. Adolph Caesar is just wrong in this part and I was amazed to read he’d been nominated for several acting awards including an Oscar for this part. He’s just not scary, and his voice is so annoying that every time he speaks I felt he grated on me. However, the rest of the cast are perfect, including Howard E. Rollins Jr. as Capt. Davenport and of course the great Denzel Washington as Pfc. Peterson.

The other bugbear was the soundtrack by Herbie Hancock. The film is based in the deep south of America in 1944, yet has a soundtrack that at times is too not dissimilar to Harold Faltermeyer’s Beverly Hills Cop score, which gives some parts of the film a comedic ‘vibe’ which doesn’t fit in.

Despite me moaning, I DID enjoy the film, especially when Wings Hauser popped up as the bad guy. It’s rare for me to say this but, I’d welcome a remake of this, and I can imagine Denzel playing the part of Vernon Waters beautifully.

I used to live in Los Angeles and write about Rock bands. Now I live in wonderful Wales and write about films. I like video games (especially RDR2) and am also a painter...gratuitous plug: follow my art account on Instagram @artbytinar
LAST TEMPTATION sign to Crusader Records Interview: Pollyanna McIntosh