Review: A Tale of Two Sisters 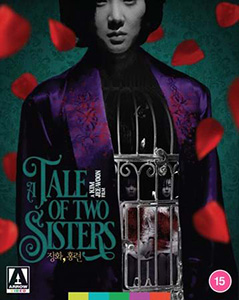 Written and directed by Jee-woon Kim, this Korean drama/mystery/horror tale follows Su-mi (Lim Soo-jung), a young girl recently released from a mental institution, who returns home with her father and younger sister Su-yeon (Moon Geun-young) and has to face her stepmother who is acting very strangely towards her…not to mention haunting visions that she has around the family home.

Tugging on your heartstrings while at the same time making goosebumps appear, the twisting narrative has you constantly trying to second guess what will happen next, only to reveal narrative tidbits which then has you reevaluating where everything is leading to.

A visual treat, this blu-ray release highlights the stylish cinematography by Mo-gae Lee, which accentuates the changing mood of each scene and draws attention to the detailed set design.

Lim Soo-jung is captivating in the lead role, taking you with her as her character experiences frequent emotional trauma and upset. This definitely isn’t a ‘feel good’ movie.

This is a movie that warrants repeat viewing, as initially confusing scenes are suddenly made clearer when watching once again. Which also applies to the bountiful and in-depth special features, where 3 commentary tracks are just the starting point to learn all you could ever want to about A Tale of Two Sisters.

A superb release of a hauntingly chilling movie, this is a worthy addition to anyones collection.

FIRST PRESSING ONLY: Illustrated booklet featuring new writing by critics Stacie Ponder and Anya Stanley, plus a new translation of the original Korean folktale that inspired the film.