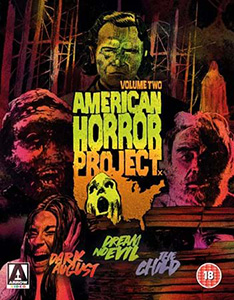 Following on from American Horror Project Vol. 1 which was released back in 2016, Arrow Films have unearthed and restored 3 more obscure American horror movies which have more than likely flown under peoples movie radar until now.

Arrow’s American Horror Project series is co-curated by author Stephen Thrower (Nightmare USA: The Untold Story of the Exploitation Independents) and Vol. 2 once again brings to our screens 3 rarely seen offerings that have been newly remastered from the best surviving film elements, while also making their debut on Blu-ray. Needless to say with an Arrow Films release, they are also accompanied with a wealth of special features.

All 3 movies benefit from knowing as little as possible about them before viewing, with the one common thread between them all being that they are as mad as a box of frogs!

To whet your viewing appetite, here are a few details to entice you.

Dream No Evil sees Grace MacDonald (Brooke Mills) as a messed up young woman who grew up in an orphanage and desperately wishes to see her Father. However, be careful what you wish for, as Daddy may not be exactly what you want.

Mixing reality and psychotic visions, with the odd bizarre dance thrown in for good measure, Dream No Evil is a fever dream come to life.

Dark August continues the madness when Sal DeVito (J. J. Barry) runs down and kills a young girl. This is just the beginning of the nightmare for him though, as the girls grandfather (who just happens to be an occultist) puts a curse onto him.

So begins a series of mysterious happenings, leading him to seek help from a sorceress to try and lift the curse.

The Child has Alicianne Del Mar (Laurel Barnett) as a housekeeper tasked with looking after Rosalie Nordon (Rosalie Cole), a young girl grieving the death of her mother…and who also has the power to raise the dead.

Needless to say, things get a little out of control.

All 3 movies look the best they have ever done, while the special features (especially the commentary tracks) add a huge new appreciation for these little seen independent horror releases.

With (very) low budgets, acting that ranges greatly in quality, and practical effects that can sometimes be shocking, yet at other times laughable, American Horror Project Vol. 2 may very well not appeal to a lot of viewers.

However, if your cinematic tastes include the more obscure and inventive side of horror filmmaking, then this is most definitely the box set you have been waiting for.

Review by Dave from discs kindly supplied by Fetch Publicity.