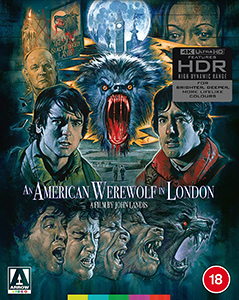 What can I say about An American Werewolf in London that hasn’t been said before!?

A cinematic classic that hasn’t aged since its release 41 years ago, and now looks better than ever on this 4K UHD release from Arrow Films.

Both myself & Tina commented while watching that we were seeing details that we’d never noticed before on previous releases, particularly in the darker scenes…of which there are plenty.

The initial attack scene on the moors and the final scene in Trafalgar Square revealed more than we’d ever seen, while colours popped and David’s red puffer jacket looked better than it has ever done.

Still retaining a layer of film grain to keep that cinematic look, details both during the day and night scenes are superb, highlighting the incredible special make-up effects by Rick Baker and his team, which stand up to close scrutiny to this day and still look amazing with the added clarity and resolution that this 4K UHD brings.

The 5.1 DTS-HD master audio track immerses you further into the narrative, with some good spot effects coming from the rear speakers and unnerving you as you wait for the werewolf to attack once again.

The story is timeless: boy meets girl, boy falls in love with the girl, boy turns into a werewolf and starts attacking people.

I’m not even going to begin to give anymore of a synopsis of the movie than that, as you’ve either watched it dozens of times already (like myself), or if for some reason you’ve never watched it before, I sure as hell don’t want to spoil a classic such as this.

What I will say is that this is one of those movies that never fails to entertain no matter how many times you watch it. Filled with amazing scenes, likeable characters, quotable lines (if you play darts you will start saying “You…made me miss” to someone whenever you miss the board), a great soundtrack, and the best werewolf transformation scene in cinema history.

As if an amazing movie released with the best picture and sound quality isn’t enough, this is also loaded with incredible special features, which will keep you entertained for many hours after you’ve watched the main feature…before inevitably going back and watching the movie again…and again.

Go and buy it now, you won’t be disappointed.

Review by Dave from a disc kindly supplied by Arrow Films via fetch Publicity.