Review: An Angel At My Table 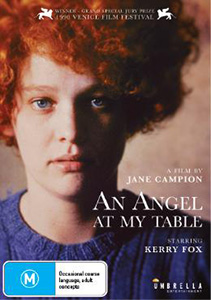 Directed by the amazing Jane Campion, An Angel At My Table is based on writer Janet Frame’s three autobiographies: To the Is-Land (1982), An Angel at My Table (1984), and The Envoy from Mirror City (1984).

Originally made as a three-part TV series for New Zealand Television, the series was condensed and released as a movie to great critical acclaim in 1991.

Like the biographies it’s divided into three sections, with the lead role played by three different actresses at different stages in Frame’s life. Karen Fergusson (child) with her shock of curly red hair is a wonder, as is Alexia Keogh (adolescent), and Kerry Fox as the adult Frame.

The film follows Frame through this ‘Overcoming all odds, odds stacked against you’ story, from her destitute family, through her years in a mental institution, and into her writing years after her escape.

Part one, for me is the most enjoyable and shows little Janet growing up with her family in a New Zealand farm. Janet, a pudgy girl with frizzy red hair, never quite fits in. However, her parents and siblings are supportive, and through this unconditional love she begins losing herself in poetry and stories.

A grown up Janet attends college, and by now her mental state has deteriorated due to an earlier family tragedy. Misdiagnosed as a schizophrenic, she spends eight years in a mental institution where she had to suffer over 200 shock treatments.

Janet’s writing provides an escape from the institution and just as she is about to undergo an operation similar to a lobotomy, she learns that her first book has been published. She is released from the hospital and receives a literary fellowship.

I do like this film, but it is a story that you have to be in the ‘right’ mood for. The mental health struggles and constant barrage of abuse at the little fat girl is quite wearing (as I was a little red haired, fat girl and a lot of this story was a bit too close to home for me. I didn’t get a literary scholarship by the way).  So I’m biased.

A well written and directed film.

Review by Tina from a disc kindly supplied by Umbrella Entertainment.

I used to live in Los Angeles and write about Rock bands. Now I live in wonderful Wales and write about films. I like video games (especially RDR2) and am also a painter...gratuitous plug: follow my art account on Instagram @artbytinar
New single from Liv Sin Soundcheck interview: Snowy White