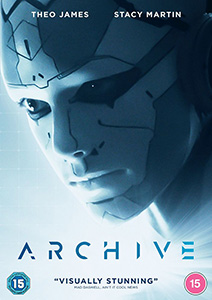 Written and directed by Gavin Rothery (in his feature film directorial debut), Archive stars stars Theo James as George Almore, Stacy Martin as his wife Jules, Rhona Mitra as his onscreen boss, and Toby Jones as an employee of Archive; a company that keeps dead peoples collective consciousness “alive” in digital form for an extra few years so that they can get all of their personal matters in order, as well as still being able to communicate with their loved ones through a series of video calls.

Set in 2038, a future where robots seem the norm, George is hidden away in a James Bond-esque building with a draw-bridge in the middle of nowhere in Japan, and at night has reoccurring dreams of a catastrophic car crash.

George lives alone while working on AI routines, aided by 2 earlier versions of his robotic AI work. His ‘secret’ work is occasionally interrupted by his boss who yells at him about not working hard enough, all while keeping his current work quiet from her.

This is all interjected with scenes of him talking to his dead wife through a video screen on an ‘Archive Device’ in the middle of their home (that’s not as confusing as it sounds).

The 3rd robot he makes is really something, akin to Ava in Ex Machina, but better. She them morphs into a version which looks more lifelike and similar to Jules. Shame really as the original robot effect was fantastic.

It’s a pretty run of the mill sci-fi where you can easily guess the ending, but the effects pop it up a notch from humdrum.

I used to live in Los Angeles and write about Rock bands. Now I live in wonderful Wales and write about films. I like video games (especially RDR2) and am also a painter...gratuitous plug: follow my art account on Instagram @artbytinar
Review: The Other Black Girl ROSE TATTOO to release ‘Blood Brothers’ on Limited Edition Red Vinyl