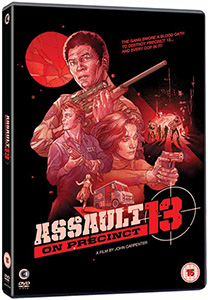 Los Angeles gang members seek retribution upon the L.A. police force following an ambush in which the police shot dead a host of ne’er-do-well’s (they were the lesser known gang who never got the recognition of the Crips and the Bloods). Targeting an almost abandoned police station occupied by a minimum skeleton staff, police officer Ethan Bishop (Austin Stoker) and a group of in transit prisoners, of which the baddest of the bad assess is Napoleon Wilson (Darwin Joston), it soon becomes a siege from which nobody may survive.

Released in 1976, Assault on Precinct 13 began an almost 20 year stretch in which director John Carpenter could do no wrong (in my humble opinion of course…not forgetting too the fantastic Dark Star released 2 years previously). His taught direction and use of the widescreen image has shades of Sergio Leone and the Western genre which Carpenter holds so dear and a lot of his movies follow the framework of.

You can’t talk about a John Carpenter movie without of course mentioning the score, of which he is usually the composer. The score for Assault on Precinct 13 is one of my all time Carpenter favourites; eliciting the feeling of the erratic heartbeats of both the assailants and defenders of the police station. Using his trademark synthesizer composition technique of slowly layering each track on top of each other, building it up to a crescendo, before breaking it back down again, this is one score that will stay in your head way after the end credits have rolled.

Special mention has to go to Darwin Joston for his portrayal of anti-hero Napoleon Wilson. Witty and larconic, he is the template of various characters that would become inhabited by Kurt Russell in later Carpenter movies.

A great 40th anniversary release from Second Sight Films and one in which you will STILL be shocked by an ice cream van (cryptic comment for any new viewers).

Review by Dave (host of 60 Minutes With) from a disc kindly supplied by Second Sight Films.