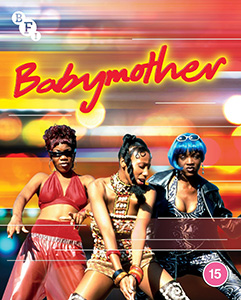 The one and only full feature directed by Julian Henriques (who is now a Doctor and lecturer in media in London), Babymother tells the story of Anita (Anjela Lauren Smith) and the club reggae scene in late 90s London.

It’s rather difficult for me, a 50- something white woman from a small Welsh village, to review a film about a young black woman with 2 young children, an absent partner, who wants to be a singer in London, effectively. I couldn’t catch most of the dialogue, and thankfully could put on subtitles, which in truth, didn’t help much.

Anita is young, she has 2 little kids and their father Byron (Wil Johnson) is famous locally for singing. He sees himself as some sort of Adonis who wants fame more than kids and Anita.

Perhaps the most unlikeable character in the film is Anita herself. Constantly dumping her kids on anyone who’ll look after them, surly, entitled and plain annoying, she wants to sing onstage with Byron, and when he carries on without her, also nicking her song, she ends her relationship with him, determined to form her own band with her friends Sharon (Caroline Chikezie) and Yvette (Jocelyn Esien).

There are several musical ‘interludes’ which fit in really well with the story, and despite me being a consummate reggae hater, they were pretty good.

Now I was NOT looking forward to watching this, never mind reviewing it. Nothing about it appealed to me, and I couldn’t identify with any of the story.

The acting is as ropey as hell, the outfits the women wear are straight out of a drag show (did they REALLY wear outfits like that in the 90s?) and more than once I wanted to kick Anita up her arse for abandoning her kids. But good god this is entertaining! I was glued to it (albeit with the subtitles on).  Even Dave watched it without looking at his phone once (I really enjoyed it…Dave).

I simply can’t put my finger on what it IS that makes his film so entertaining. I can’t even place it in the ‘so bad its good’ box.

Chock full of fantastic extras, this really is a bit of an enigma to me.

I used to live in Los Angeles and write about Rock bands. Now I live in wonderful Wales and write about films. I like video games (especially RDR2) and am also a painter...gratuitous plug: follow my art account on Instagram @artbytinar
Sons of Liberty new single “Fire & Gasoline” Review: Evercade Namco Museum Collection 1