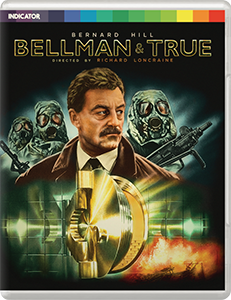 Based on the novel of the same name by Desmond Lowden, Bellman and True is a film I’d not only never seen, but never heard of. But true to form Powerhouse Films and their Indicator series of releases have a way of bringing ‘forgotten films’ back to life.

To date I’ve always been more than pleasantly surprised by all of their releases. They seem to acquire films that deserve to be recognised as classic cinema, but have unfortunately dipped from most people’s memories. Bellman and True being a great example.

Made by HandMade Films and Euston Films (the drama making subsidiary of Thames Television), the production was originally a three part series made for television with an approximate runtime of 150 minutes. The film version has been edited to 112 minutes.

However this version comes in the original pre-release version that premiered at the 1987 London Film Festival (122 mins), and the original UK theatrical cut (114 mins). I watched the longer version, and saw only one instance of grainy film, the rest being seamlessly included.

It’s obvious from the outset that they are fugitives, and it’s not long until we find out it isn’t the law they’re hiding from.

It transpires that Bellman is a computer programmer who has stolen a computer tape (this was made in 1987) for Salto (Richard Hope) containing details of the security system at a bank near Heathrow Airport.

Salto and his cronie Gort (Ken Bones) kidnap the boy in order to force Bellman to continue working for them. Its very interesting to see Richard Hope play against type in this film. Often cast in ‘genial’ parts in film and TV, here he exudes menace perfectly, making you wonder right up to the last moments of the story if he might now be such an all-out bad guy.

A lot of the story shows the planning stages of a robbery, and although it looks dated it’s very much in tune with the time, and where something so convoluted could be boring, you never lose interest. The reason isn’t so much the script, but the great acting and believable relationships in the film. Hill and O’Brien bounce off each other perfectly, and their story is as complicated as the robbery itself.

The actual robbery is nerve jangling, which amps up a million notches as the gang attempt to escape.

Yet another cracking release from Powerhouse Films, who are in my opinion the crown princes of amazing films you’ve never seen before.

It also includes a great array of extras, including a fascinating chat with the director and also O’Brien (now grown up of course) who reminisces on making the film as a ten year old…and all the fish and chips he got to eat.

I used to live in Los Angeles and write about Rock bands. Now I live in wonderful Wales and write about films. I like video games (especially RDR2) and am also a painter...gratuitous plug: follow my art account on Instagram @artbytinar
Normal Service Resumes May 15th Skid Row sign to Golden Robot Records