Review: Born on the 4th of July 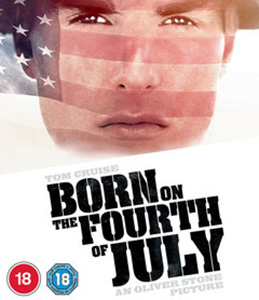 Based on Ron Kovic’s bio of the same name, and directed by Oliver Stone, Born on the 4th of July is the film that really made Tom Cruise a ‘star’ and the movie where he finally got to act.

The film depicts the life of Kovic over a 20-year period, examining his hard-core catholic childhood, the horror of his military service and then his near death shooting, paralysis and subsequent recovery after the Vietnam War. More time is given to this then his commitment to anti-war activism.

Originally Kovic, was going to be played by Al Pacino, but after being in development hell for ten years, the part finally went to Cruise. I can remember the shock of publicity photos at the time of release, seeing the handsome Cruise in a wheelchair with wispy hair.

Winning a lot of awards at the time, it was interesting to see the film now, mainly to see if after its original emotional gut-punch, if it’s now dated.
It hasn’t, in fact the anti-war message and Cruise’s performance is even MORE powerful. I found myself filling up a few times at the anguish he portrays.

It’s a sweeping film, and a worthy addition to Stones Vietnam trilogy.

Born on the 4th of July is released 14th December.

I used to live in Los Angeles and write about Rock bands. Now I live in wonderful Wales and write about films. I like video games (especially RDR2) and am also a painter...gratuitous plug: follow my art account on Instagram @artbytinar
Iron Savior release their new album ‘Skycrest’ Review: Devil in a Blue Dress