Review: Call Me By Your Name 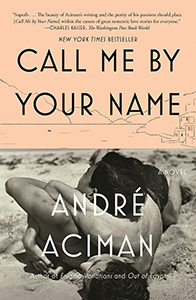 Yes, I will admit that I did watch the film before reading the book. Heck, I had never even heard of the book until I had seen the film, but I don’t think that there’s anything wrong with that.

The film makes you feel like you’re sunbathing on a warm summer day on the shores of Italy watching a romance unfurl in front of you, whereas the book makes you feel you are Elio, you are experiencing what he feels, learning as he does. It makes your heart feel full and warm as his relationship with Oliver begins to bud and slowly fades but never truly dies.

Something that I enjoyed so much when I started reading this novel was that there wasn’t a huge emphasis on the fact that Elio likes both men and women. It wasn’t the central focus of the novel that Elio had fallen for a man, but just that he had fallen in love. The fact that Elio was mostly comfortable with his sexuality was amazing to read rather than the entire novel be an inner conflict of ‘oh dear, I love a man, what do I do?’

You still feel like you’re enjoying a holiday away in Italy, but it’s remote, small tone, cobblestone streets, white buildings. I particularly enjoyed reading this book by an open window, breathing in the fresh air that would breeze inside, basking in the sun as to feel more immersed.

Everyone who has seen the movie will know of the iconic ‘peach scene,’ in which Elio masturbates into a peach and Oliver eats it. I thought this was going to be the only strange part in the novel, however I was wrong. (Spoiler ahead by the way.) There is a scene nearer to the end of the novel where Oliver ‘does his business’ but Elio asks to see it so that there are no secrets between them, which is then promptly followed by Elio doing his business and Oliver seeing his. In a romance novel I did not expect a scene of two men looking at each other’s shit as to feel closer. Strangely though, the way André Aciman writes this scene (along with the peach scene,) is almost poetic, it seems romantic in its own strange way. (When I tried explaining this to others they promptly laughed in my face, which you may also be, but I understand.)

As much as I loved Oliver and Elio together there was a character I felt sorry for, Marzia, who I felt was essentially played by Elio. It was clear she had some feelings for him, and thought that maybe a relationship was blossoming, only for Elio to fuck her off when he gets what he wants with Oliver. Marzia deserved honestly from Elio, whether that be telling her he had moved on, or only wanted something casual with her.

The ending of the movie left me in tears, sad for Elio and making me feel like he had been betrayed by Oliver, however this was not the real ending. The novel ends with Elio and Oliver meeting again 20 years later, both are grown adults with their own lives, Elio now living in the US, Oliver married with children, his eldest being the same age as Elio when he had met him. However, despite all of this you can tell there is still something shared between them, something that had never died, something that will never die.

Being a hopeless romantic at heart, it is one of the few novels I have read where I wasn’t sad/frustrated that the two love interests didn’t spend forever together. The ending left me satisfied, made my eyes well and my heart warm. Although it is clear that Elio still would love to be with Oliver he is quite content that they never will be, and is happy enough to keep hold in his heart the special time they spent together – as will I.

Call Me By Your Name is beautifully written, and makes you feel like you’re falling in love all over again. All I recommend is that you find the sunniest place you can to read it, sip on some cold juice and immerse yourself into the beautiful piece of literacy that this is.

Hi I'm Megan! I like to read books, a lot of books. It was my favourite hobby as a child and has lead me to pursue my dream of becoming an author! I'm a creative writing university graduate, which means I still continue to read a lot. I am also vegan, an environmentalist and am always preaching sustainability. Please enjoy my book reviews and leave me any recommendations!
Welsh rock sensations, Scarlet Rebels, release 1st single from new album Soundcheck: End of the Road KISS