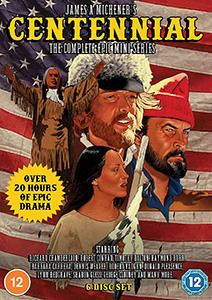 Centennial is a 12 episode American television miniseries based on the 1974 novel of the same name by James A. Michener that aired in America from October 1978 to February 1979.

It tells the story of a town and the inhabitants of Centennial, Colorado, from 1795 to the 1970s and was produced by John Wilder. It was one of the longest and most ambitious television projects ever attempted at that time and ran for a total of 21 hours with a huge budget of $25 million dollars. It employed four directors and five cinematographers, and featured over 100 speaking parts, and now Centennial has been released in the UK by Fabulous Films.

I have no memory of it being shown on UK television and on looking it up I still can’t find any evidence that it was shown over here.

This may be a very biased review of an old TV show! I have for years sort of ‘collected’ TV shows that I vaguely remember as a kid from the 70s, that I now watch with unbridled pleasure: Dallas/Dynasty/The Colby’s, yes, but there’s more: Alias Smith and Jones, The Thorn Birds, Shogun, Roots and North and South, shows that are historical in nature, with huge casts all overacting their chops off. You can’t begin to imagine the pleasure I had in discovering Centennial. Not only had I never seen it (or heard of it) but it stars… Richard Chamberlain. The king of 70s mini series.

Now this is a big box set, and so far I have only watched episode 1 (which is almost 2 and a half hours long) and it is PERFECTION…even Mr 60MW sat and watched and enjoyed it. (I’m loving it – Dave).

It seems the story will be about one town, and the families in it, but also talks a lot about the land, environment and importantly has a big Native American presence. Though these NA’s are played by any actor who is foreign…for example, Barbara Carrera plays ‘Clay Basket’. She is Nicaraguan.

So despite the actors not being ‘perfect’ for the part (Richard Chamberlain plays a Scot with the best ginger wig ever, and the most horrendous Scottish accent), considering it’s the 70s it’s an engrossing rather wonderful bit of telly. But as I said, I am biased. I love this sort of thing.

So if you’re looking for something a bit different to your usual Netflix viewing, you can’t go wrong with 20+ hrs of Centennial!

Review by Tina from discs kindly supplied by Fabulous Films.

I used to live in Los Angeles and write about Rock bands. Now I live in wonderful Wales and write about films. I like video games (especially RDR2) and am also a painter...gratuitous plug: follow my art account on Instagram @artbytinar
Chivalry 2 will Double in Size for Free 10 questions with Alexis Kendra