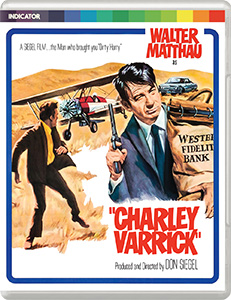 When trying to abscond from a small town with their ill gotten gains from the local bank, their plan goes tragically wrong. This is just the beginning of their problems, as unbeknownst to them, the bank is currently harbouring over $750k of money owned by the Mob. Charley immediately knows that this will make them a target for revenge, but Harman is blinded by the cash and wants to go on a spending spree with it.

When the Mob send out Molly (Joe Don Baker), a ruthless hitman, to hunt them down, the stakes are raised to a matter of life or death.

Charley Varrick may not be the most well known of the work of director Don Siegel, but it certainly stands as one of his best. It is also a reunion of sorts of Dirty Harry, with Siegel at the helm, returning cast members Andrew Robinson, John Vernon, Albert Popwell, and a score by Lalo Schifrin. However, instead of Clint Eastwood in the titular role, it is Matthau who portrays a gritty and driven character. This is at odds to his latter work in which he played (literally) grumpy old men in comedy movies, but his performance as Varrick is superb, completely drawing you into the dilemma that he has found himself in.

Siegel directs with the assured confidence that is associated with all of his movies. Not one for wasting any time on any extraneous scenes, the narrative clips along at a pace that constantly has you on edge as to what may await the fate of each character as the next scene begins. Dialogue and action both drawing you deeper into the spiders web of promises and lies that Varrick is now entangled within.

Charley Varrick is a well written, superbly acted thriller that may well have gone ‘under the radar’ of a lot of people. This excellent release by Powerhouse Films, making it’s UK Blu-ray debut and loaded with fantastic extras, is the perfect way to get acquainted with a classic of cinema.

You can buy Charley Varrick by clicking HERE. ALL money raised by purchasing from Amazon via our website is given back to our listeners and followers in upcoming competition prizes. The more people buy, the bigger our prizes.