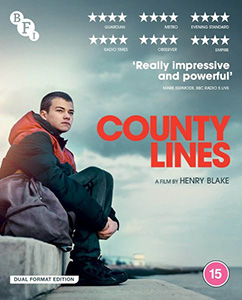 14 year old Tyler (Conrad Khan) does his best to look after his younger sister while his single mother sleeps through the day after working night shifts, or while she recovers from an all night partying session on her nights off.

With few creature comforts surrounding him, and things made even tougher when his mum loses her job, Tyler is easily led into the seedy world of drug dealing when approached and groomed by Simon (Harris Dickinson), a young man who uses and discards his drug mules with little regard for the consequences.

Local deals soon escalate to wider pastures, with Tyler travelling the country by train and meeting up with other people higher up the drug dealing food chain, but also inadvertently stepping onto the toes of other established dealers, who soon take offence to him being there and need to “teach him a lesson he won’t forget”.

Inspired by stories he heard from kids while working at a referral unit, writer/director Henry Blake‘s feature debut is unflinching in the way it depicts the lives of children who are coerced into drug trafficking, and it lingers long in the mind after the end credits have rolled.

Conrad Khan gives a stunning performance as the desperate Tyler, taking you along with him on an emotional journey of hope and hopelessness, joy and fear, pleasure and pain, all captured in its stark brutality by cinematographer Sverre Sørdal, who immerses you in a world hitherto barely glimpsed at by most people in their normal day to day lives.

County Lines is a cinematic experience that eschews fancy special effects and rousing musical scores to manipulate your emotions, focusing instead on the human condition and the things people will do just to ‘get by’.

Leaving you emotionally drained at the end and, selfishly, thinking how lucky you are that this peek into the darker side of society is playing out on your screen and not in your own personal life, this hard hitting film is a welcome addition to anyones collection and whets the appetite for further stories from Henry Blake.

An insightful and emotional commentary by Blake is just one of the informative and entertaining special features on this BFI release.