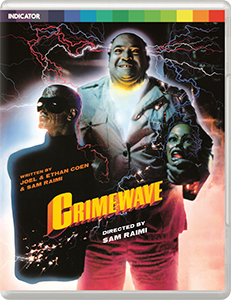 Directed by Sam Raimi (who also shares writing credits with Joel and Ethan Coen), and featuring Bruce Campbell, Brion James, Louise Lasser, Paul L. Smith, Antonio Fargas and many other of my favourite actors of that time period, you’d think that Crimewave would be one of my “go to” movies of the past 36 years.

However, from my first viewing on VHS many years ago, this whacky and surreal comedy/crime/horror story never sat comfortably with me, and even on this high definition remaster from Powerhouse Films, it once again failed to win me over as a fan.

Raimi’s film tells the bizarre story of a security-system installer, Vic (Reed Birney), who finds himself in the electric chair when he falls in love with Nancy (Sheree J. Wilson), a femme fatale on the run from two bumbling exterminators ‘of all sizes’ (Paul L Smith and Brion James).

Cue a series of bizarre and over the top scenes where Raimi’s love of The Three Stooges is apparent for all to see, with Bruce Campbell and the rest of the cast hamming it up to the extreme.

Crimewave is an ‘in your face’ experience from beginning to end. It’s lurid colour scheme, the exaggerated acting, and the kinetic camera moves leave little room for any subtly throughout its short 82 minute running time (though this release gives you the option of viewing 4 different versions of the movie).

I much preferred the informative and entertaining special features to the movie itself, especially the 2 commentary tracks which give a great insight into the troubled production and the experience of being on set at the time.

If you like whacky Three Stooges-esque humour and a completely over the top experience, then Crimewave will most definitely entertain. It is still all a bit too much for me to sit back and enjoy, though the special features did keep me highly entertained.

Interview: Gillian White Review: Journey to the Far Side of the Sun