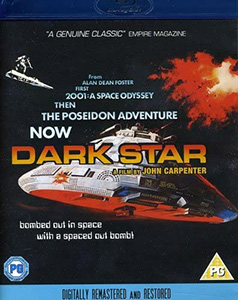 The 4 man crew of the spaceship Dark Star are on a 20 year mission to destroy unstable planets which are in danger of exploding, but when bomb #20 ignores the ships computers to abort a detonation, the lives of everyone onboard are put into danger.

Dark Star is a short film made at film school by John Carpenter (yes, that John Carpenter) which had added scenes filmed for it to make it long enough for a theatrical release, and this Blu-ray release from Fabulous films contains both versions, as well as more great special features too.

The low budget constraints are clear to see (using a painted inflatable beachball as an alien being one example) and the acting is never going going to be the most memorable thing about it, but what makes Dark Star an enjoyable watch is the clear enthusiasm for the project by all involved, which also comes across in the fantastic 2 hour documentary “Let There Be Light: The Odyssey of Dark Star”.

Despite not much really happening throughout its running time except showing the increasing friction between the crew members, Dark Star has a certain charm that still holds my attention many years after viewing it for the first time.

Don’t expect Star Wars, hell, don’t even expect Starcrash…Dark Star is a low budget acquired taste, but a tasty one should you wish to try it.