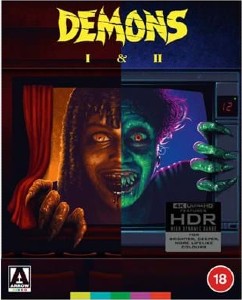 Demons is a film that I’ve loved since I first rented it on VHS many years ago, and then bought the ex-rental VHS for a price that would now get me this fantastic 2 disc UHD blu-ray set from Arrow Films. So the fact that it (and its sequel) is now available in the best possible physical format is great news for all fans.

It’s been a pleasure to review all of Arrow’s UHD releases so far, and while we don’t go into the minutiae of the technical details of picture and sound, both Demons 1 and 2 absolutely astounded me in both the visual and audio department. Both films have numerous sequences that are set either during the nighttime or in an environment where there is little light, and scenes where in previous viewings a lot was lost in the darkness, it is here revealed in all its glory. The colours pop like never before…with ‘Demon pus’ looking even more disgusting, while the 5:1 mix pumps out the superb music score/soundtrack and adds a low end punch that really adds to the atmosphere.

The narrative of both movies are basically the same: people get trapped in an enclosed space (Demons = movie theatre, Demons 2 = apartment block) after a demonic possession, sparked by an onscreen event they are watching, starts to spread across everyone and a mass killing spree begins.

In both movies there is also a gang of wild ‘hoodlums’ driving around outside who inevitably get caught up in the events too…neither gangs are particularly safe drivers either. Though their carefree driving is far less dangerous than the demon-clawed, throat ripping monsters they will encounter later down the line.

Lamberto Bava directs everything at a breakneck pace, which fits the pumping soundtrack and the crazy blood splattered events that play out onscreen, and while everything is completely over the top (Demons 2 even has a demon dog!) you still buy into the events that are happening and root for everyone (anyone!) to escape the manic demon attacks.

While both Demons 1 & 2 are completely bat shit crazy, Demons 2 takes it to a whole other level, with the aforementioned demon dog joining a demon kid, a baby demon (which resembles the demon love child of a Gremlin and the imp from Sorority Babes in the Slime Bowl-o-rama), and a bonkers sequence in a basement car park where logical decisions go out of the window.

Both movies have never looked or sounded better, and add in the usual array of superb special features that Arrow put onto their discs (as well as a 60 page booklet, a double sided poster and a replica Metropol Theatre movie ticket from Demons) and you have a double disc set that you should be dying to get your hands on…figuratively of course…don’t get too close to those demons!

Review: Overcooked – All You Can Eat JUSTIN LARNER ‘Find Your Way Home’ video, out now