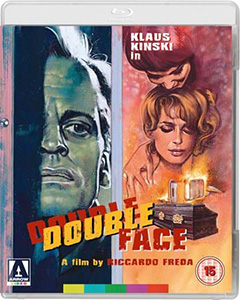 I can forgive Klaus Kinski anything, no one does deranged quite like him. On seeing Werner Herzog’s ‘Aguirre, Wrath of God’, then Fitzcarraldo, and then Crawlspace, I knew here was a man who, not unlike Dennis Hopper and Oliver Reed, was rather bonkers, but had the saving grace of being able to act.

Kinski, by all accounts, was as ‘difficult’ off screen as his characters on screen, and is quite the revelation in Double Face. Despite being a Giallo, his character John Alexander appears to be…normal.

Alexander (Kinski) meets and quickly marries heiress Helen Brown (Margaret Lee), but the relationship falters because Helen is a lesbian, and she soon moves her ‘friend’ Liz (Annabella Incontrera) in.

Out of the blue Helen tells John he is the sole beneficiary of her will, we then see someone planting a bomb in the wheel of Helen’s car, and you can guess the rest.

Kinski is supremely watchable in this mish mash film. Gaping plot holes (but it was the 60’s so they were possibly deliberate) are forgotten when you look into his baby blue eyes and a face creased by anguish. Even his horrible dubbed voice (in the English language version) can’t tear you away.

The tone of the film is set by  Nora Orlandi’s excellent score and director Riccardo Freda, perhaps best known for The Horrible Dr. Hichcock (which I’ve unfortunately never seen). Freda directs with confidence and flair, however some of the ‘special effects’ are SO corny I actually laughed out loud. In the first 15 minutes of this movie, there are two car accidents involving toys the most awful green screen toboggan ride.

Arrow’s new Blu-ray of the film looks beautiful, the colours zing and the soundtrack is glorious.

As usual the special features including a commentary by Tim Lucas, a lengthy appreciation of Nora Orlandi by Lovely Jon, a huge image gallery, art by the best artist out there; Graham Humphreys, and  a very informative and entertaining video essay on Riccardo Freda’s films by Amy Simmons (I didn’t  get to read the first printing which also includes an illustrated collector’s booklet by Neil Mitchell (sad face), are amazing.

Perhaps the crowning glory of the special features is an interview with Nora Orlandi who is mesmerising.

In short – one of those weird Italian late 60’s films made unmissable by Kinski’s performance.

I used to live in Los Angeles and write about Rock bands. Now I live in wonderful Wales and write about films. I like video games (especially RDR2) and am also a painter...gratuitous plug: follow my art account on Instagram @artbytinar
Gorilla Riot announce new single and tour dates Welsh rock sensations, Scarlet Rebels, release 1st single from new album