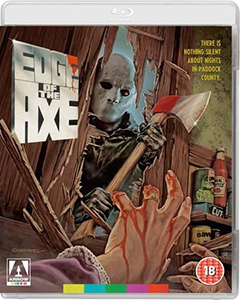 Released on Blu-ray for the 1st time, Edge of the Axe is ‘slasher’ movie that until now had surprisingly passed me by! So this fantastic new release from Arrow Films was the perfect way to introduce me to the axe swinging antics from director José Ramón Larraz.

The narrative is a simple one (aren’t they always in slasher movies!?): an unidentified masked psychopath is chopping people up with a large axe…the 1st victim succumbing to a vicious series of blows while in the relative safety of their car in a car wash…and this is before the title sequence has rolled!

The usual “who is the killer” guessing game throws up an expected array of red herrings, but it is still a great game to play as you watch the movie, and this is one of those movies that benefits from watching with likeminded friends and a few beers. Cheesy dialogue, corny characters, ridiculous situations and a whole load of axe murders, all make for a hugely enjoyable experience.

Its 80’s roots are cemented through the use of arcade video games as the beginning of a burgeoning relationship between 2 of the lead characters, as well as them using the embryo of ‘WhatsApp’ to keep in contact with each other while apart…all accompanied by the computer speaking out every line typed into it in a very creepy voice that would have had me unplugging it at the first opportunity.

However, it eschews the 80s horror movie trope of stripping the female characters of their clothes before they are killed, so if you are expecting any T&A titillation you are going to be disappointed.

Its derivative plot of ‘masked psycho killer’ has enough original tweaks to separate it from an overcrowded genre, and I have to admit that I was thoroughly entertained all the way through…including when the axe was quite obviously rubber when striking its victim.

I loved the characters in it, the story kept me interested as to where it was going next, the kills were enjoyable (if you are allowed to say that about axe killings), and the picture quality is superb…anyone who watched this back in the day on VHS is in for a great surprise.

Grab some friends and some beers and prepare for a fun filled evening…though hide any axe that may be around…just to be safe.