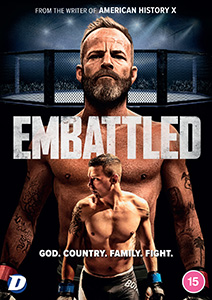 Much like Rocky isn’t a boxing movie (it’s a wonderful love story), Embattled (despite the DVD cover) is not a movie about MMA fighting, although there is a great fight at the end of it…much like the aforementioned Rocky.

Embattled centres around the life of Cash Boykins (Stephen Dorff), an MMA champion estranged from his ex-wife and special needs son who he refers to as “The Tard”, but who stays closer to his eldest son Jett (Darren Mann) who has aspirations to follow his father and be an MMA champion, despite being physically and mentally abused by him.

Cash doesn’t give a damn about anyone but himself, leading to a lifestyle of booze, women and narcissistic behaviour, so when the fighting careers of his son and himself collide, he doesn’t care what damage is done both outside of the octagon and inside of it.

Stephen Dorff is fantastic as Cash, bringing to the screen a character that you just love to hate and is mesmerising in every scene that he is in, while Darren Mann is the perfect foil as his son Jett, eliciting empathy for the young man as he struggles with both the physical and mental abuse dished upon him by an out of control father.

The majority of the almost 2 hour running time is taken with getting to know the characters and the diametric opposites of the wealthy lifestyle of Cash as opposed to the struggles of his ex-wife and sons, watching as Jett does everything he can to try and help drag his family up from the situation they find themselves in, all while Cash seemingly doesn’t give a damn about anything except himself, not even his new wife and son whom he doesn’t give a second thought to as be beds other women on a whim.

It’s all played out beautifully, leading to an explosive climax where scores can finally be settled, and thankfully ending in a very satisfactory way with a couple of shots that show where we leave them all in their lives…not all endings have to be happy ones.

Come for the MMA fighting, stay for the family drama…plus a cracking performance by Stephen Dorff.

Review by Dave from a disc kindly supplied by Dazzler Media via The Warrior Agency.