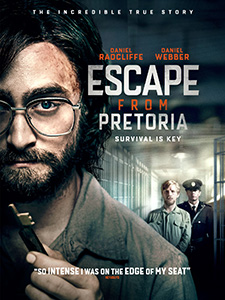 Based on the 2003 book Inside Out: Escape from Pretoria Prison by Tim Jenkin, this film is based on the real prison escape by three young political prisoners from an apartheid era South African jail in 1979.

Daniel Radcliffe plays white ANC activist Tim Jenkin, who, along with his friend Stephen Lee (Daniel Webber), are imprisoned in 1978 for their ‘leaflet bombs’: harmless devices which “explode” and throw leaflets into the air highlighting the atrocities of apartheid.

The two friends are sent to an infamous prison where they’re seen as race traitors and hated by other inmates and the guards. However, despite the prison being tough, they are white, so it’s not that tough.

Inside Jenkin and Lee meet another political prisoner and future escaper: Frenchman Leonard Fontaine (played almost like he’s channelling a ramped up Nic Cage; Mark Leonard Winter). Apparently Fontaine isn’t a real character, though someone similar did escape with the duo.

Radcliffe has been in some rather eclectic films since Harry Potter, and this film follows that trend, being a mixture of a tense thriller bordering on a Shawshank/Pappilion mash up of “will they actually get away or not?”

Jenkin realises all the locks have those enormous old fashioned castle-type keys, and he decides he can duplicate them from wood in the prison workshop. So the extraordinary business of designing and making these wooden keys begins. There’s also a lot of key dropping, trying to open cell doors with contraptions, hiding in cupboards and nearly being found about a million times, but it’s all done well, and by the end of the film I needed a stiff gin to relax (yes, it’s one of those high tension movies).

And I didn’t think of Harry Potter once.

I used to live in Los Angeles and write about Rock bands. Now I live in wonderful Wales and write about films. I like video games (especially RDR2) and am also a painter...gratuitous plug: follow my art account on Instagram @artbytinar
February 2020 Decade of Decadence (Remastered) interview: Fred “The Hammer” Williamson