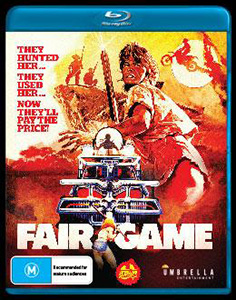 Jessica (Cassandra Delaney) is all alone in the Australian outback where she runs a wildlife sanctuary. When 3 belligerent kangaroo hunters (Peter Ford, Garry Who and David Sanford) appear in the area, she inadvertently crosses paths with them, and so begins a game of ‘cat and mouse’ that escalates with each verbal and physical blow traded between them.

The narrative of Fair Game plays out almost like a cartoon version of Rocky 4 (as if Rocky 4 wasn’t cartoonish enough!), with 2 opponents slugging it out toe to toe with neither willing to back down despite the hits they are taking.

Tonally, Fair Game is a mixed bag. The infamous scene where Jessica is stripped half naked and hogtied to the front of the hunters truck is certainly shocking, but it sits awkwardly with the rest of the movie where the 2 main parties are on the receiving end of a variety of escalating physical punishments which seem to have no real consequence until the very end. At times I was expecting Wile E. Coyote to appear in the background and an anvil to fall on his head.

That said, there are certainly tense moments. The scene where Jessica awaits from a naked slumber to find a polaroid photo on her fridge door of her lying there was quite chilling, but compared to that one scene where she is tied to the truck, it all pales into comparison. Not that I’m saying the whole movie should have been some ‘rape/revenge’ flick akin to I Spit on Your Grave, it’s just that the whole movie comes across as a potpourri of ideas that don’t quite gel. There’s not enough nudity for the T&A crowd (though if you want to see what the future wife of John Denver’s boobs look like (she married him in 1988), then you’ll see here), it’s not nasty enough for the ‘torture porn’ addicts, it’s not bloody enough for the ‘gore hounds’, and the smatterings of the previously mentioned parts are just enough to put off those who want a clean action adventure romp.

What Fair Game is though is FUN. Despite the tonal shifts during its 86 minute running time, one thing you won’t get while watching the relentless action is bored. Much like the aforementioned Rocky 4, if you let yourself just ride along with the ridiculous action playing out in front of you, then there will always be a scene to surprise/shock/laugh at, never too far away. Especially as Jessica seems to make a point of not escaping from the hunters clutches, despite being given numerous opportunities!

Making its debut on Blu-ray and accompanied by some great special features, this is another release from Umbrella Entertainment that you should check out. Maybe then you could tell me what happed to the joey she put in a jumper at the beginning of the movie!