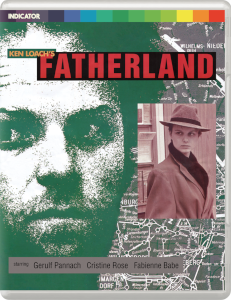 Directed by Ken Loach and written by playwright Trevor Griffiths, Fatherland is a political drama about East German protest singer Klaus Drittemann (Gerulf Pannach), who after being pressured to leave East Germany because of his inflammatory song lyrics, soon discovers that life in the West is equally controlling in other ways.

Disheartened by the way his art is being abused by the powers above him, he sets out on a journey to reunite with his father who left East Berlin 30 years previous when Klaus was a young boy.

He is accompanied on his journey by young French journalist Emma (Fabienne Babe) who knows where his father is, but she also has secrets of her own.

I’ve been a big fan of Ken Loach for a long time and it was a surprise to me when this arrived at 60MW Towers for review that it was a film of his that I’d never seen before. So it was with great anticipation that I sat down to watch.

Almost 2 hours later when the end credits rolled, I was left with a feeling of disappointment, and dare I say it…boredom.

The narrative is split between Klaus in his home of East Germany, and then in the latter part his journeys around the West of the country. But within both sections there are plots and sub-plots which just seemed to run out of steam and go nowhere for me, leaving me not really caring what happened to anybody.

Loach excels in putting “little slices of life” onscreen, following believable characters during a specific part of their lives, but unlike I, Daniel Blake , Carla’s Song, or Kes, I was left caring little for either the characters or the situation they were in.

Maybe I will warm to it more on a repeat viewing.