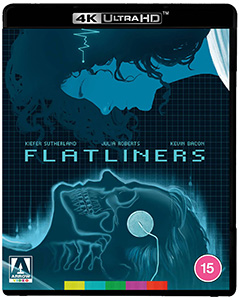 Flatliners is one of those early 90s films with one foot still in the 80s, directed beautifully by the master of neon camp Joel Schumacher and starring the epitome of late80s/early 90s mega film stars triptic of Kiefer Sutherland, Kevin Bacon and Julia Roberts (along with Oliver Platt and William Baldwin).

Nelson Wright (Sutherland, post The Lost Boys), is a medical student who lives in a millionaires all white mansion with billowing net curtains, who has a plan to find out what happens when we die.

He persuades four of his medical school classmates—Joe Hurley (Baldwin), David Labraccio (Bacon), Rachel Manus (Roberts), and Randy Steckle (Platt) to assist him in his quest. This involves medically ‘killing’ themselves, before being brought back to life.

Each one of the friends goes under (except Steckle) and each re-live some bad incident/occurrence while dead, which then follows them back to the live world. Labraccio discovers the only way to redemption, is to put right the wrongs of the past.

There are massive plot holes, the acting especially from Sutherland, is very angry mad scientist, and all of them own a flapping long raincoat that flaps a LOT and looks fantastic on the artificially rain soaked streets of America.

The light is cool neon, the sets are like the leftovers from Blade Runner and the story is just plain daft. BUT this has to be one of the most enjoyable films of the early 90s, corny yet sympathetic, daft (near the beginning of the film seeing Kevin Bacon shimmy out of his college window and down the wall with climbing gear instead of just using the door and going downstairs is a hoot) but so entertaining.

Arrow Films new 4k version (approved by cinematographer Jan De Bont) is glorious. All those neons now have real depth and it really does add to the look and sound of the film giving greater clarity and depth to the many night time scenes.

We at 60MW Towers had a blast watching this, highly recommended.

I used to live in Los Angeles and write about Rock bands. Now I live in wonderful Wales and write about films. I like video games (especially RDR2) and am also a painter...gratuitous plug: follow my art account on Instagram @artbytinar
July 2022 Decade of Decadence HOUSE OF LORDS : ‘Saints And Sinners’