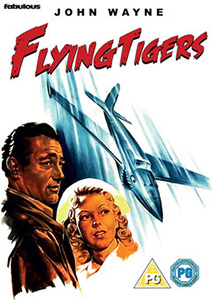 John Wayne is synonymous with riding the range on a horse and chasing the bad guys, so it was initially a shock to see him as Capt. Jim Gordon, squadron leader of ‘The Flying Tigers’: an American volunteer group who fought the Japanese in China before America’s entry into World War II.

He may have swapped his steed for something with a lot more horse power, but he’s still chasing the bad guys.

Woody Jason (John Carroll) is a new recruit to the squadron, but instead of being motivated by more noble desires, he is desperate for money to pay for a breach of promise suit.

His reckless flying and disregard for the welfare of his fellow squadron members does not go down well with Jim Gordon, and emotions become even more strained when Woody sets his eyes (and libido) on Jim’s girlfriend Brooke (Anna Lee).

Released during World War II, Flying Tigers can be viewed as a propaganda piece as well as a slice of entertainment, with the miniature work, stock footage and recreated air battles all adding to the sense of ‘being there’.

The dialogue often veers into being cheesy, and John Wayne is…well, John Wayne…full of swagger and great one liners. When leaving his plane after a particularly hectic aerial dogfight, an engineer looks at the row of bullet holes left just behind the cockpit that he has stepped out of. With a nonchalant glance in the direction of the holes, Wayne simply says “termites” and walks away from the plane as though it were simply another day at the office.

Flying Tigers is a great war movie that still holds up in todays cinematic world of fancy cgi effects.

Soundcheck interview: Niki Westerback OOTP 20 and FHM 5 are 50% off for the Steam Summer Sale