Review: Footsteps in the Fog 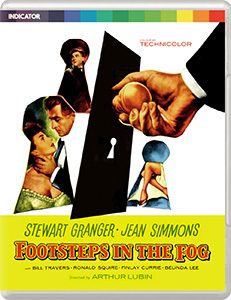 Footsteps in the Fog is a gothic thriller following the life of Stephen (Stewart Granger) after the death of his wife. A death he deliberately caused through poisoning. His cockney maid, Lily (Jean Simmons) finds out about the murder and uses it to blackmail Stephen for malicious, yet simple and understandable, gain in the form of a promotion to head housekeeper. Though her goal appears simple at face value, a more twisted version of Lily’s objective begins to rise when she starts to creep more and more into Master Stephen’s life and into the shoes of his murdered spouse. Perhaps she should consider that Stephen killed his wife for far less…

I was not expecting Footsteps in the Fog to be the experience I initially thought it was going to be and I’m very happy it wasn’t. It’s by no stretch a perfect or even close to perfect experience but I was pleasantly surprised by how weird and dark this film could get. I honestly didn’t expect the characters to sink as low as they did but time and time again the film shocked me and left me feeling appalled.

A thing I really enjoyed about this film was its choices of framing it’s narrative. There are effectively three main characters in the film; Stephen, Lily and barrister friend of Stephen’s, David (Bill Travers). Each character gives their own perspective on the events as they unfold. Stephen and Lily feel like absolutely despicable Hitchcockian creations with only loose morality, if any at all, while David feels like our paragon of justice, doing what’s right for the sake of doing what’s right. You’d be forgiven for thinking David would be the protagonist. He is after all, the heroic do-gooder. But the film dedicates most of its time to its two despicable leads, showing us the lengths of their depravity and throwing us into the middle of their intensely strange relationship.

The film’s few problems can mainly be put down to feeling a little behind its own time. Strangely archaic methods in editing left me feeling a little jarred and shocked that this came out as late as 1955. The performances also have that hokey quality expected from films of this era. Hokey doesn’t mean bad though and honestly, for all the aged qualities on display, these performances ooze with the charm of a bygone era of British cinema.

Footsteps in the Fog is a gripping gothic noir, featuring some outstanding performances of the most despicable humans ever put to screen. It’s certainly not for everyone, and shows its age in a number of ways, but those who are drawn to this era of British cinema should definitely not miss this one out in their collection.

Gripping and as twisted as a film of this era can be, Footsteps in the Fog proves to be a very affective thriller filled with a ton of unexpected twists and turns throughout its runtime.

You can buy Footsteps in the Fog by clicking HERE. ALL money raised by purchasing from Amazon via our website is given back to our listeners and followers in upcoming competition prizes. The more people buy, the bigger our prizes.

Review by Joel from a disc kindly supplied by Powerhouse Films.

I like to think I'm a critic out of spite for all the criticism I receive in film school. I enjoy consuming all things entertainment and art but I enjoy pretending I could do any better even more. Jokes aside, I absolutely adore creating and interacting with all art and entertainment. Always happy to air my obnoxious opinions on games, films and music and I can only hope you also get some kind of sick kick out of reading them.
Soundcheck ’em out: Sir Reg, I’ll Be Damned, Beyond The Black, Jawbone release debut album