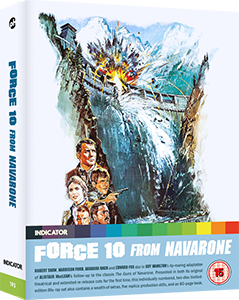 After a gap of 17 years Force 10 from Navarone is the sequel to The Guns of Navarone, both based on a fictional Greek island in Alistair MacLean novels. The original stars of Mallory (Gregory Peck) and Miller (David Niven) are now played by (Mallory) Robert Shaw, who died before the films release and (Miller) Edward Fox.  It also stars Harrison Ford (hot off Star Wars), Carl Weathers (hot off being Apollo Creed in Rocky), Franco Nero, Barbara Bach and Richard Kiel (both had previously been in James Bond films which director Guy Hamilton had a hand in).

Near the end of the war, Mallory  and Miller are sent to find then kill Nicolai, a German spy, who previously betrayed the Navarone mission to the Germans and is now believed to have successfully infiltrated the Yugoslav Partisans as Captain Lescovar (Franco Nero – phwoar).

To get to Yugoslavia, the two men are forced to pair up with ‘Force 10’, an American sabotage unit, led by Colonel Barnsby (Harrison Ford), and as they are stealing a Lancaster bomber, they inadvertently pick up with Weaver (Carl Weathers), a US Army sergeant escaping arrest by the military police.

You see where this is going? Yes, it’s a wartime, Sunday afternoon caper you sit and watch with your dad. Now really I should be comparing this to The Guns of Navarone, BUT despite knowing that at some point I have watched it, I have no memory of it whatsoever. In fact, I thought Frank Sinatra was in it (he isn’t, that’s another film). So as a stand-alone film, it’s entertaining enough.

I do find Franco Nero mesmerising and out of all the cast it’s Carl Weathers that shines through the action sequences AND the racial put-downs. You don’t have to have seen the first film to ‘get’ this one despite some of the characters being the same.

The jewel of this release is without a doubt, the extras. No stuffy academic BORING long winded extras here, oh no, this is solid, ENJOYABLE entertainment that gives you a real insight into the making of this film and what happened behind the scenes. “From Žabljak With Love” and “A Life Behind the Lens” are wonderful, really down to earth men who made the film, give warts and all accounts and I was glued to the TV! Hearing about the problems of filming while trying to keep Robert Shaw standing because he was so pissed is GOLD.

Indicator releases are without a doubt my favourite for extras, they are so watchable.

So in all, a good solid dad film, with a cracking set of extras and a lot of Franco Nero being brooding and handsome.

I used to live in Los Angeles and write about Rock bands. Now I live in wonderful Wales and write about films. I like video games (especially RDR2) and am also a painter...gratuitous plug: follow my art account on Instagram @artbytinar
Think Like a Dog on Digital Download 6 July & DVD 20 July SOEDESCO is attending the Steam Game Festival

Something for the weekend? How about a double dose of Decade of Decadence shows? Ep262 released on Saturday & Ep263 on Sunday. #podcast pic.twitter.com/c9G0JWUdXY