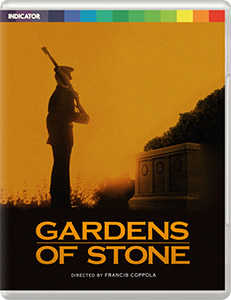 Set in 1968, Sergeant Clell Hazard (James Caan in magnificent form) is disillusioned with the Vietnam war and sees America as being in an unwinnable situation.

Based at Fort Meyers’ Arlington Cemetery, Hazard sees far too many young bodies arrive for burial and despairs at the waste of life.

When idealistic soldier Jackie Willow (D.B. Sweeney) arrives at Fort Meyer with thoughts of going to the Academy and then onto the frontline in Vietnam, Hazard’s morals are pushed to breaking point, as Willow is the Son of a veteran Sergeant whom he was good friends with.

Does he protect Willow from an almost inevitable death in Vietnam, or allow him to follow his dreams?

Gardens of Stone is a powerful film with a cast on top form throughout. The aforementioned Caan and Sweeney are joined by James Earl Jones, Dean Stockwell, Anjelica Huston and Mary Stuart Masterson. Each of them bringing empathy and gravitas to their characters.

Under the direction of Francis Ford Copolla, Gardens of Stone draws you into its rich narrative as the futility of war becomes ever more obvious.

When asked to pick memorable movies about the Vietnam war, I doubt that Gardens of Stone gets mentioned before the likes of Apocalypse Now, Full Metal Jacket, Platoon, et al. However, this fantastic release by Powerhouse films, accompanied as always by an informative and entertaining array of special features, will help to bring this riveting look at the human condition during war time more into public awareness.

You can buy Gardens of Stone. by clicking HERE. ALL money raised by purchasing from Amazon via our website is given back to our listeners and followers in upcoming competition prizes. The more people buy, the bigger our prizes.

Alf Garnett double bill Review: The Boys in the Band