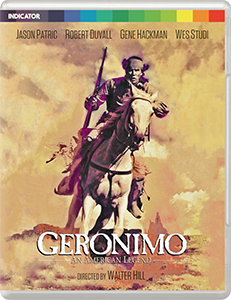 Geronimo: a name that most people are familiar with (usually as a loud shout before jumping off something), but whose life may not be so well known.

Geronimo – An American Legend takes up the story of the Apache chief as the Apache Indians have reluctantly agreed to settle on a US Government approved reservation.

Not all of them however are keen to settle down as corn farmers on a restricted piece of land allocated to them, all while having to abide by rules enforced upon them which include not leaving their reservation and not being allowed to drink any alcohol.

Pushed beyond his limits when an American soldier shoots dead an Apache medicine man, Geronimo (Wes Studi) leads a group of Apache warriors into the American heartland, evading the soldiers who are trying to track them, as well as bounty hunters looking for some quick money offered for Indian scalps.

The inevitable conclusion of a meeting between Geronimo and his Apache followers with the heads of the American military leads to decisions being made as to whether it can all end peacefully or with more bloodshed.

Director Walter Hill curbs the violence and bad language found in many of his other movies and concentrates on developing the characters through their considered actions and dialogue, all superbly performed by the lead actors Jason Patric, Gene Hackman, Robert Duvall, Matt Damon, Rodney A. Grant and the aformentioned Wes Studi, whose line of “There is plenty of land. Why do you want it all?” resonates just as much today as it would have back then.

The cinematography by Lloyd Ahern II is brought to life in this vibrant High Definition widescreen remaster, highlighting the warm rich tones used to accentuate the beautiful landscapes, with the 5.1 surround sound giving particular punch to the gunshots and breathing life into the haunting score by Ry Cooder.

The special features help to immerse the viewers even more into the “Old West”, with an informative commentary by western experts C Courtney Joyner and Henry Parke being just one of many ways leading you to say “well I never knew that!”

Another superb release from Powerhouse Films in their Indicator series of releases.

Geronimo – An American Legend is released on 25th January 2021.