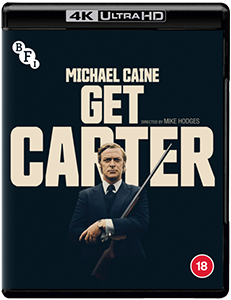 Based on Ted Lewis’s 1970 novel Jack’s Return Home, Get Carter tells the story of Jack Carter (Michael Caine), a London based gangster who returns to his hometown in Newcastle to find out about his brother’s supposedly ‘accidental’ death. Disobeying the London gang’s boss to stay put, he travels up North on the train to find out what happened.

In the BFI’s accompanying booklet for Get Carter, Alex Cox (of Videodrome fame) describes the film as ‘nasty’ (along with all the other ‘good’ UK gangster films) and I agree, from Brighton Rock to Dead Man’s Shoes, UK Gangster films are violent and sordid and very entertaining.

Filmed around a 1970 grimy Newcastle upon Tyne, Gateshead and County Durham, Hodges, the film’s producer Michael Klinger and star Michael Caine wanted to put a more realistic portrayal of ‘one punch and you’re down’ violence on screen than Hollywood fluff. Helped by the grimy, 70s brown décor of cinematographer and documentary film maker Wolfgang Suschitzky who gave the scenes a naturalistic look.

The story itself is in the best tradition of the UK Gangster genre ,grimy and sordid. Jack Carter has lived in London for years in the employ of organised crime bosses the Fletchers, and Jack is having an affair with Gerald’s girlfriend Anna (Britt Ekland) and plans to run away to South America with her. But first he has to go to his brother Frank’s funeral in Newcastle. Apparently he died in a drunk-driving car accident. Jack stays in Frank’s house, and we see Franks open coffin in the living room. At the funeral, Jack meets his teenage niece Doreen and Frank’s married part-time mistress Margaret (who we find out is also a porn star). From here the story of Frank’s demise unfolds taking Jack on a journey of revenge, violence, sexual exploitation and death.

I think among film fans, Get Carter can be described as a sacred film of British Cinema. That edginess, the story itself, along with the cream of UK actors made it an instant classic. Michael Caine, already a ‘film star’ unleashes a performance of such blue eyed iciness, his face unchanging, his posture assured, he IS Jack Carter, gangster and murderer in a black trenchcoat. Watching the scene where he ‘sex’ talks to Anna on the phone in front of his older landlady as she rocks in a rocking chair as he stares at her still makes for very uncomfortable viewing (he later sleeps with her and this leads to the infamous ‘naked with a shotgun scene). He is not only chilling, but completely believable, he will not stop until he finds out the truth. There are so many outstanding moments in this film, from the iconic dialogue (‘you’re a big man, but you’re out of shape’) to just the ‘feel’ of it.

This really is as good as everyone says it is, not only a real classic of UK cinema, but also a cracking film to watch.

This new 50th anniversary 4K release from the BFI is beautiful, the opening sequence shows the London lights colours ping and the grime is truly drab. Hearing Roy Budd’s fantastic soundtrack is a treat too. Then there are some amazing extras that makes this an absolute “must buy”.

I used to live in Los Angeles and write about Rock bands. Now I live in wonderful Wales and write about films. I like video games (especially RDR2) and am also a painter...gratuitous plug: follow my art account on Instagram @artbytinar
KISSIN’ DYNAMITE embark on German Tour + release new single & video July 2022 Decade of Decadence