Nigel Havers dressed as Fantastic Mr Fox, very charming.
A room full of snake charmers, yep pretty charming.
But not as charming as this.

When I first heard of Ghost Giant I had a stupid yet logical thought. I wondered how no-one knew who this giant was. If a ghost is simply a non-corporeal version of a living thing then this ghost giant must have been a giant when alive. How does a giant go unnoticed? And also if the giant is now a ghost then that means that somewhere there is the corpse of a giant and it would probably smell quite a lot and be attracting quite the fly swarm. You’d notice that surely.

I was applying ridiculous logic to a story of a ghost giant in a world of talking animals. I’m an idiot, and luckily the game itself stopped me thinking such things as it won me over and almost gave me a dusty eyeball.

So the question is how would Zoink do with a PSVR title? 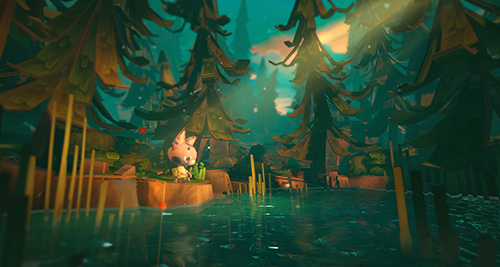 Lets get the kit needed to play this out of the way. Since its a VR title then a point to you if you guessed you will need a PSVR to play it, there is no flat version here I am afraid. You are also out of luck if you only have a dual-shock controller, Ghost Giant is Move controllers only. If you have all the kit then congratulations you can play this.

In Ghost Giant you play as the titular Ghost Giant as you manipulate the world around you. You never see your face or body you just see your big blue transparent ghost hands, each one controlled with a Move controller. 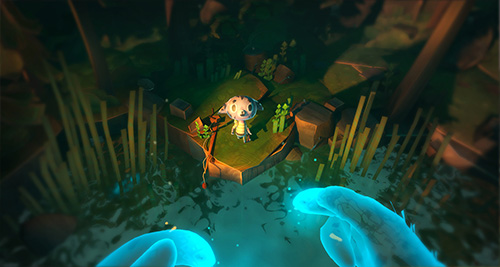 The game itself revolves around the journey you take with Louis, a small talking cat as he deals with the situations in his life. Louis has things happening and it is up to you to help him where possible by using your hands to interact with the world in various ways to help Louis move through his story.

At the start of the game you find Louis crying on a riverbank, As Ghost Giant you are just staring at him until his tears seem to give your arms form and you are able to interact with him. You poke Louis with your giant finger to get his attention which goes as well as you would expect a small child to be confronted with a 20 metre or so tall ghost. He’s terrified.
Throughout this first scene you manipulate some objects in the world and help him out as he tries to run away from you, getting into a mess while he does. You start to gain his trust, you start to become his friend. You seem to be the only reliable (non)person in his life. Eventually you get a high five and fist bump, it’s touching.

Storywise it is very hard to say much without spoiling anything. Suffice to say that it handles its main plot points with heart and sensibility. There is a dark side to this plot, not too dark mind, that the game handles with a light knowing touch. There are questions answered and questions that remain unanswered in great detail and this makes sense. The story is about Louis, he is a child and he does not need to know all of the details. He needs to only know that things may get better, that he can be a child again. Sometimes things are hidden from children to help preserve innocence and Louis is an innocent. You don’t have to hit rock bottom in explicit detail for life to look a little brighter from then on. Ghost Giant is the story of a child in tough times who doesn’t have the adult understanding to understand the situation, and it does it in a sweet hopeful way that fits perfectly.

If you are after guns, boobs, gore, guts and utter misery, look elsewhere, there are a million other games for you.

Graphics wise the game is wonderful. Playing as essentially a conscious camera you tower over this world in first person watching Louis who is the protagonist essentially play his life in third person.
I have always been a fan of VR used for third person games, Astrobot being a prime example, as I think the solidity of the characters in the this little micro world in front of you gives the impression that you are some vast entity looking over a living world in front of you.
All of the characters look almost like they are marionettes walking around. They have simple facial animation but the bodies are excellently animated giving real character to these little ‘people’ in this world. You almost expect to lean in and see bits of string or elastic holding them together at the limbs. The world itself has a paper, cardboard and wood like feel to it giving each scene a mini theatre quality that the level was built for you to watch. I used the word charming at the start and graphically it just is, it’s colourful emotive, well designed and charming.

The sound design is equally impressive. Voice acting throughout is strong, an unusual mix of accents used for a game that appears to be set in a mix of America and France. I also found the music equally impressive. Again, but possibly only in my own head, it gave me what seemed to be a mix of the lighter moments of Studio Ghibli’s Spirited Away and the theme tune from Allo Allo. That probably sounds horrendous but it works very well indeed, honestly trust me.

Gameplay wise the closest comparison would be an old school point and click adventure. With your big blue hands you manipulate objects in the world, move things around, unlock locks, open things, put things together, find things and even take in a spot of fishing, kind of. All of these actions are to help Louis move forward in his story. 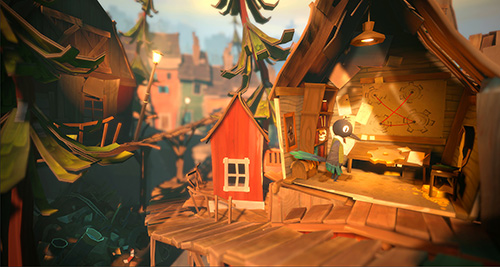 The best parts however are when you get to remove parts of buildings and see what is happening inside. Louis will walk up to a front door of a building and knock on the door. You can then lean forward to the same level as Louis and peer in through the windows to see who and what is inside. Once Louis has gone in the house you can often spin the house round, via the use of a lever or button and then take the back wall of the house off to see the whole thing set out in front of you like a living Sylvanian Families house. Often during important plot points the light of the world will dim down leaving a spotlight on the characters in front of you. As you lean in for these close little scenes it feels like the game is presenting a stage within a stage and its quite wonderful.

There are two possible downsides to the gameplay that may impact peoples enjoyment. The first is the games length. It will take around 4-5 hours to complete possibly a little less. These days when every game seems to demand 100+ hours from you this will seem a little tight for some. If you measure worth on game length then again possibly stay away. Personally I only judge worth on the experience itself and I thought the game length was perfect for the story the game was telling. Given the choice of this for 20 quid or going to the cinema to watch a Michael Bay film I know where I would spend the money (hint: its not the cinema).
It is also worth noting that this is almost a ‘one and done’ game as replay value is limited unless you want to watch the story again. Each level has collectibles for you to find in the world but the chances are you will find most of them the first time round just by being inquisitive.

The only other potential negative comes from the Move controllers themselves. Ghost Giant is a very tactile game and it asks you to do a lot of object manipulation in its world. This can occasionally lead to the Move controllers freaking out as they try to track where your hands are but this seems to be part and parcel of using them in any game. They do the job well enough but it can break the immersion from time to time. This mainly happens when the game asks you to lean quite a way into the world and interact with something nearer the background.
Despite this I never had that many problems once I had everything set up correctly, the game does have quite a robust setup for your playing position at the start.
As for physical gaming position, the game asks for your arms to do quite a lot, but from the waist down nothing. Play this sitting down but just be prepared to wave your arms around and lean a lot to get closer to the world.

If you like VR narrative stories I would recommend this without hesitation. It tells a wonderful little heartfelt tale. It looks lovely and sounds equally as nice. It is a fine example of VR at its most tactile giving depth to gameplay that may just seem ordinary on a flat screen.

If you don’t have a snake in a basket or you aren’t married to Nigel Havers but you seek some charm in your life say hello to Ghost Giant.

Pub menu rating: 6oz well cooked steak but occasionally my fork turns into a lemon.
Review by Adam.
If you want to buy anything reviewed on our site (or anything at all!), then please use the Amazon link provided and help support us with our website and podcast. Thank you.

As I journey through my own existence gaining wrinkles and bad joints, I still love video games, films and music. I've been podcasting for a few years and now here I am writing things. Who would have thunk it? Thanks for reading and check out all our reviews and shows on the site. Treat yourself.
Review: Robin Hood: Men in Tights Teramaze release new video