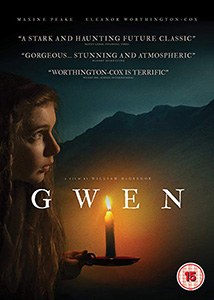 Writer/director William McGregor (in his first full length film) gives us an eerie foray into the dark industrial revolutionary Hills of North Wales in Gwen.

Set in 1855, Elen (Maxine Peake) and her daughters Gwen (Eleanor Worthington-Cox) and Mari (Jodi Innes) work the small holding up in the Snowdonia Hills while dad is off fighting in the Crimean war.

It soon becomes apparent that the local slate quarry owner Mr Wynne (Mark Lewis Jones) wants the land the farm is on, and he may have had the family on the adjoining farm disposed of to get their land.

The story itself feels like a mixture of Beast and The Witch and it has a real sense of ‘the other’ about it.

One horrible thing after another befalls the isolated trio of women, stared at in Chapel (are they witches?), Elen has convulsions, a dismembered heart is nailed to their front door, the livestock are mysteriously slaughtered and Gwen finds her mother hacking into her own arm and letting the blood drip into a pan. Is she self-harming? Or is something more eerie and sinister happening?  Is Gwen hallucinating? Are the women slowly going mad?
It’s a film stuffed full of ambiguity. Layers of meaning, female oppression, extreme poverty, sexual oppression of women (I was convinced Elen was engaging in some sort of sexual activity with Mr Wynne).

Eleanor Worthington-Cox plays Gwen with an innocent intensity, her big blue eyes seem to be constantly searching for answers, while Maxine Peake is her usual magnificent self, she really does shine in historical roles, and surprisingly Richard Harrington’s part is brief.

The real star of this film is the cinematography, like Kyffin Williams and Osi Rhys Osmond got together and painted the scenery. I am Welsh (from North Wales too) and felt I could smell the damp sheep, and the endless mud and slate are palpable. Grey and bleak, yet small glimmers of pink sky break through but give no respite from this grim story, which is relentless in its woe. Cinematographer Adam Etherington deserves a mention as this is one of the most painterly films I’ve seen, and along with the howling Welsh wind there’s no need for constant dialogue.

A beautifully shot, great looking, slow burner of a film, with amazing performances by the two female leads.

It can be hard to watch, but it stays in your thoughts afterward.

Gwen is currently in cinemas and will be released on DVD on November 11th 2019.

I used to live in Los Angeles and write about Rock bands. Now I live in wonderful Wales and write about films. I like video games (especially RDR2) and am also a painter...gratuitous plug: follow my art account on Instagram @artbytinar
Review: Nintendo Switch Nemesea premiere lyric video ‘Fools Gold’