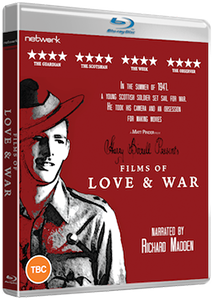 This film starts with Carina Birrell, and her dad (granddaughter and son of Harry) rummaging about in their garden shed, eventually lifting up cans of very old film. As I continued to watch the film I wondered if this were true or just for effect, as keeping something akin to the crown jewels in your shed seems a bit daft.

In 1928 aged only eleven, Harry Birrell was given his first cine camera. He said it was ‘The greatest toy a child could ever receive,’ and as he grew to adulthood he honed his craft by filming his pals in a remote part of Scotland. Luckily to concide with the visuals, he also kept an intimate diary, and voicing Harry beautifully is Richard Madden.

In Films of Love and War Harry takes us from his small Scottish Island as he joins up during WW2, and leaving his sweetheart behind, Harry records everything he can with a wonderfully cinematic eye on any film he can beg off the army. We see him commanding a battalion of Ghurkhas in the Indian army at the start of WWII to going behind enemy lines in Burma.

The documentary co-produced by actor Carina Birrell, who shares with us some of the 400 reels of film, photographs and diaries in this documentary. And what a sights we see! Some vistas straight out of Black Narcissus (only these are real, while BN was filmed in a studio), Jungles, regiments of Ghurkhas and small wistful goodbye picnics before the war starts.

It is in short astonishing and a must see for anyone. My one complaint is, a film isn’t enough. Rather than seeing his granddaughter look into the distance in contemplation (yes, really) this warrants a full series spanning decades, because Harry is so charming I wouldn’t mind seeing his 60s films either. A series of Harry’s film narrated by Richard Madden. Beautiful.

I used to live in Los Angeles and write about Rock bands. Now I live in wonderful Wales and write about films. I like video games (especially RDR2) and am also a painter...gratuitous plug: follow my art account on Instagram @artbytinar
Commercial Fishing Simulator Fishing: North Atlantic Available Now for Xbox One and PlayStation 4 ABC…D of gaming: April – May 2021