Review: He-Man and She-Ra: The Secret of the Sword 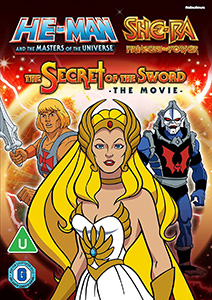 Released too late for me to get into as a child, and too early for my kids to latch onto, my knowledge and viewing history of both He-Man and She-Ra is limited to the 1987 Dolph Lundgren movie Masters of the Universe.

So I went into He-Man and She-Ra: The Secret of the Sword knowing virtually nothing about it apart from it is the first 5 episodes of the He-Man spin-off, “She-Ra; Princess of Power” put together to make a movie.

Consisting of a Prince, a Princess, a talking tiger, a creepy castle, a sorceress, a talking broomstick and much more, this has all the fantastical elements to grab kids attentions despite an animation style that has since moved onto mostly highly detailed cgi.

A classic tale of Good vs Evil, whereby good quite obviously prevails, this has enough corny dialogue and over the top set-pieces to keep both kids and parents entertained throughout…though be prepared for many cries of “I HAVE THE POWER” once the end credits have rolled.