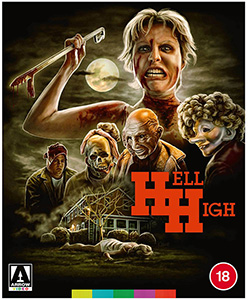 Released at the tail end of the 1980’s horror movie “slasher” obsession, Hell High spins things a little differently to keep you interested. Just don’t go into this expecting the usual “killer on the loose and high body count” excesses brought to you by the likes of the Friday the 13th and Halloween movies.

Some of this class are a gang of trouble makers led by Dickens (Christopher Stryker); a young man whose “hijinks” are decidedly cruel and which can’t even be tempered by Jon-Jon (Christopher Cousins); the high school football hero who has quit the team and has more of a stronger moral compass than the rest of the gang.

When Dickens decides to play a prank on Miss Storm things go horribly wrong, with the tables being drastically turned and the ensuing blood splattering coming from very unexpected places.

Hell High is a slow burner with much of the slim 84 minute running time being taken with getting to know the characters…and some nude scenes…I never knew that female high school teachers took so long soaping their breasts in the shower!

The final 20 minutes is where the action kicks in and the blood begins to get thrown around, and while none of the kills are of the inventiveness of what has gone before during that truly “Decade of Decadence” of horror movies, they are quite satisfying.

At 84 minutes it doesn’t outstay its welcome and it is once again great to see another lesser known movie get the Arrow Films treatment of presenting it with great picture and sound, all accompanied by an impressive set of special features that will keep you entertained and informed for a long time.