Can a video game featuring psychosis and mental health at the core of its story treat the subject matter respectfully yet also be entertaining?

I’ve had my eye on Hellblade: Senua’s Sacrifice since 2015. I attended a presentation at Eurogamer Expo (EGX) featuring developer Ninja Theory. Commercial Director Dominic Matthews chatted about their vision for the game and I was immediately interested with what he had to say. I was even lucky enough to speak to Dominic, so click on this link and jump to 31 minutes if you want to see me gushing about their games!

Senua is a Celtic warrior who has been traumatised by the death of her lover Dillion. Her quest to save his soul takes her through Helheim where she faces many demons, literally and figuratively.

Hellblade is a third person hack and slash game, with puzzle elements thrown in to balance the action. The levels themselves are fairly linear, however, there is some minor exploration where you are rewarded with discovering totems. These provide additional story on the Norse mythology featured in the game.

The graphics are generally superb and really show off what can be achieved using Unreal Engine 4. Ninja Theory have a history of creating realistic performance capture, especially with Andy Serkis playing Monkey in the excellent Enslaved: Odyssey to the West, and King Bohan in Heavenly Sword.

The facial animations and performance capture in Hellblade are absolutely stunning, and this is credit to Melina Juergens who plays Senua. You really feel for her as her journey becomes darker and more desperate. Senua experiences hallucinations and visions which distort reality and create confusion for the player. Graphical effects change what you see, which can be jarring and keep you constantly on edge. There are times where the camera follows Senua very closely, which made it feel very claustrophobic.

To add to the overall sense of fear and confusion are multiple voices which are constantly talking to Senua. It is recommended you play using headphones, and I would absolutely echo these thoughts, as it is without doubt one of the most impressive highlights of the game. The voices are constantly talking with some giving you encouragement and some filling you with doubt. Some even laugh at you as you progress through the game. This aspect of the game is handled incredibly well and huge credit has to go to the developers and mental health professionals who helped to bring Hellblade to life.

Ninja Theory are well-known for their fighting games and there is a sense of weight and heft to the combat. Your moves are fairly simple as you have quick light attacks and more damaging heavy strikes. You can parry enemies fairly easily once you start to get the timing right, and you can also dodge out of the way. You also have the ability to focus which slows down time. This can be very handy, especially when you are surrounded by multiple enemies. 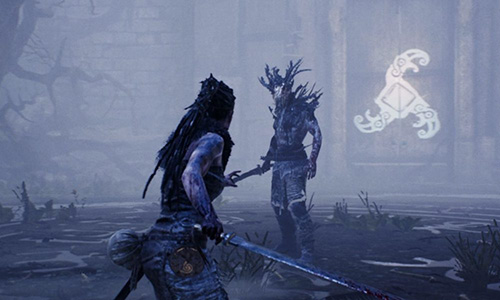 Hellblade employs an interesting mechanic whereby if you die frequently then the game ends and you have to start all over again. The explanation for this is the more you die, the more your body begins to rot. It isn’t explicitly said how many times you can die before the game is over, but seeing the rot slowly climb up your arm definitely adds tension. This seems like quite a harsh punishment, especially for people who want to enjoy the story but struggle with fighting games. I died a few times, but luckily the game didn’t end. I’ll be honest and say I may not have started again if this did happen.

The puzzles in the game revolve around aligning runes to open doors. This can be fairly straightforward, but also a little tedious and frustrating. I often found myself wandering around aimlessly trying to match the symbols which were hidden in plain sight. Some of the puzzles were especially annoying towards the end, as they resulted in instantaneous death if you didn’t get them right the first time. This added extra stress as I thought each death could be my last and the game would end and delete my save. I have to confess that I resorted to using a couple of guides on YouTube to help me get through the puzzles. All in all, Hellblade took me about 8 hours to finish.

So, I go back to my initial question. Can a video game featuring psychosis and mental health at the core of its story treat the subject matter respectfully yet also be entertaining? My answer is yes and no. In some ways the gameplay takes a back seat to the performance and story. The combat is good and the puzzles range from mildly annoying to deeply frustrating. The visuals are excellent and sound design even better.

The truth of the matter is that I found Hellblade to be deeply disturbing in places. This was in part due to the distressing performance by Melina Juergens who does an amazing job playing Senua. The graphic violence and depictions of hell also played their part to create an unsettling experience.  Listening to the voices in her/my head was almost unbearable. But it was mainly the subject matter that affected me as it felt very close to home. As you can imagine there were times where I was emotionally drained by the whole experience.

I’m sure a lot of people reading this will have experienced some form of mental health issues during their lifetime. I’m no expert, but during my life I have felt a whole range of emotions that have contributed to my mental state including, doubt, pain, anger, and even paralysis due to fear. I have been in a situation where getting out of bed took every ounce of strength in my body. I often used to feel that the world would be a better place without me in it and I was useless. I’ve been through counselling and taken anti-depressants to help get me through some of the darkest times in my life.

Why am I telling you all of this you may ask? The simple answer is because of Hellblade: Senua’s Sacrifice. Although the gameplay may not fully succeed compared to other games in this genre, the story has created a discussion which is why I am writing this. Mental health is still all too often a taboo subject, and I know from experience that bottling things up can be the worst thing anyone can do. Despite being disturbing, I don’t believe Hellblade is sensationalising mental health to sell a video-game. If anything, I took away that although you may struggle and feel that the world is against you, you do matter and there is always hope.

Despite its flaws, Ninja Theory should be commended for creating a game that is brave and raises the profile of mental health. Ultimately, I would recommend Hellblade: Senua’s Sacrifice, but just be prepared for something that can be traumatic at times.

If you’ve been affected by any of the issues you’ve seen in Hellblade: Senua’s Sacrifice and want to talk to someone or find out more then please click on the this link.

I love video games and movies as much as I love my children. However, I'd rather face off against the worst end of level boss, and watch the scariest horror movie than visit another soft play! Thanks for taking the time to visit the website and read this review. Please send any complaints to Dave and any money to me!
OOTP 20 and FHM 5 are 50% off for the Steam Summer Sale Review: Chernobyl