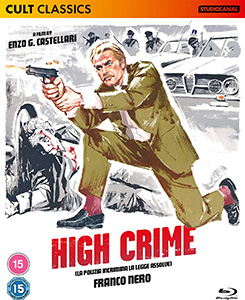 High Crime is one of Italy’s more famous Poliziotteschi films, made during a period  of socio-political turmoil in Italy and high crime rates.

They were infamous for their  graphic violence, rape, organised crime, car chases, and corruption, with cops and criminals normally tough working class loners, who act outside a corrupt bureaucratic system.

This one stars my favourite Italian actor (swoon) Franco Nero, and features the usual ‘American star’ James Whitmore (these film normally have an American actor who’s just gone off the boil in Hollywood, normally David Hemmings).

A Lebanese drug dealer arrives in Genoa and Commissioner Belli (Nero) after a long car chase and shoot out arrests him, only for the car he’s in to get blown up. Belli visits ex-mafia now reformed gardener Cafiero (Rey), for advice, to be told there’s a new player in town. Cafiero decides to take care of the new gang before the police get to them. However this proves to be very difficult when his main henchman Rico (Daniel Martín), is working for the new gang.

It’s a typical crime caper, chases, violence and Nero being blonde, angry and ravishing. It also has the added ‘family anguish’ of a daughter and girlfriend in danger.

Director Enzo Castellari has said that he created High Crime after watching the Steve Mcqueen film Bullitt and was influenced by the murder of Italain policeman Luigi Calabresi. Despite the director citing Bullitt, this is more akin to The French Connection with a more stylish policeman. Nero is magnetic as ever and the gory violence still packs a punch.

One of the better Poliziotteschi and well worth a watch especially for its nihilistic ending.

review by Tina from a disc kindly supplied by Studiocanal via Fetch Publicity.

I used to live in Los Angeles and write about Rock bands. Now I live in wonderful Wales and write about films. I like video games (especially RDR2) and am also a painter...gratuitous plug: follow my art account on Instagram @artbytinar
FIGHT THE FADE release new single ‘Revival’ Spotlight Reflection: Commando