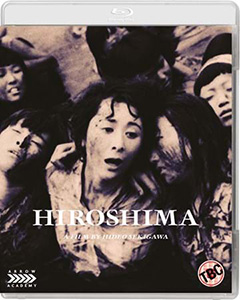 Watching Hiroshima for the first time on this excellent release from Arrow Academy brought back the same goosebumps as when I originally watched Threads on its television debut back in 1984, and while the thought of watching 104 minutes of primarily post-atomic bomb human suffering might not initially appeal to you, it is the human instinct for survival and for the love of others which prevails throughout.

Made just 8 years after America dropped atomic bombs on Hiroshima and Nagasaki, this focuses on the citizens of Hiroshima after the bomb has dropped, and specifically on a group of schoolchildren whose lives (and some of their bodies) are ripped apart.

Beginning a few years after the event, school children are suffering both mentally and physically from what they witnessed back in 1945. We then go back to that fateful day and see how the people on the outskirts of the blast tried to survive while keeping their splintered families together.

Based on the 1951 book Children Of The A Bomb: Testament Of The Boys And Girls Of Hiroshima, the movie does come across as an almost theatrical production at times, but even the occasional overacted performance does not detract from the horror that these people are living through.

The fact that the core of the narrative focuses on a group of schoolchildren makes the events even more harrowing, though it also heightens the despair and panic of the parents as they try to reunite with them.

Effectively out of circulation in Japan and the rest of the world since its original release in 1953, this blu-ray release is the complete version and restores footage from the international edit that was released in the United States in 1955.

Hiroshima is a movie that will linger long in the memory after you have watched it…and so it should.

Review by Dave from a disc kindly supplied by Arrow Academy via Fetch Publicity.

Review: The Catch: Carp and Coarse Walter Trout Reveals New Song ‘All Out Of Tears’