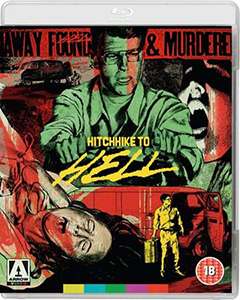 Howard (Robert Gribbin) is a seemingly shy and retiring young man who lives alone with his mother since his sister ran away from home 6 years ago.

He drives a laundry truck for a living and has a penchant for picking up hitchhikers. Unfortunately for the hitchhikers it’s the last vehicle they will ever get into, as Howard’s deranged mind makes him brutally kill them.

Police Captain J.W. Shaw (Russell Johnson) desperately tries to solve the murders, but due to their seemingly random nature finds it difficult to pinpoint who may well be responsible.

What is fuelling Howard’s desire to kill and will Cpt. Shaw be able to stop him? All this and a healthy slice of low budget sleaze can be found in this Blu-ray release from Arrow Films.

To say Hitchhike To Hell is low budget is an understatement, and if zero budget independent films are not your thing, then there is nothing here to convince you otherwise.

However, if the lower end of the moviemaking market tickles your cinematic tastebuds, then there a few tasty treats in store for you.

It would not surprise me if I looked in a dictionary and next to the word ‘sleazy’ was a link to Hitchhike To Hell. This is the sort of film where you feel like you could do with a shower after watching it, with it’s low budget constraints adding to the grimy atmosphere as Howard despatches with yet another of his victims.

The gore is minimal and the acting often becomes hysterical, but the overall narrative, despite its repetitiveness, kept me locked in for its short 84 minute running time.

Definitely not a film for everyone, but if low budget sleazy exploitation is in your usual wheelhouse of film watching, then take a ride with Howard…you’ll definitely enjoy it more than those poor hitchhikers!